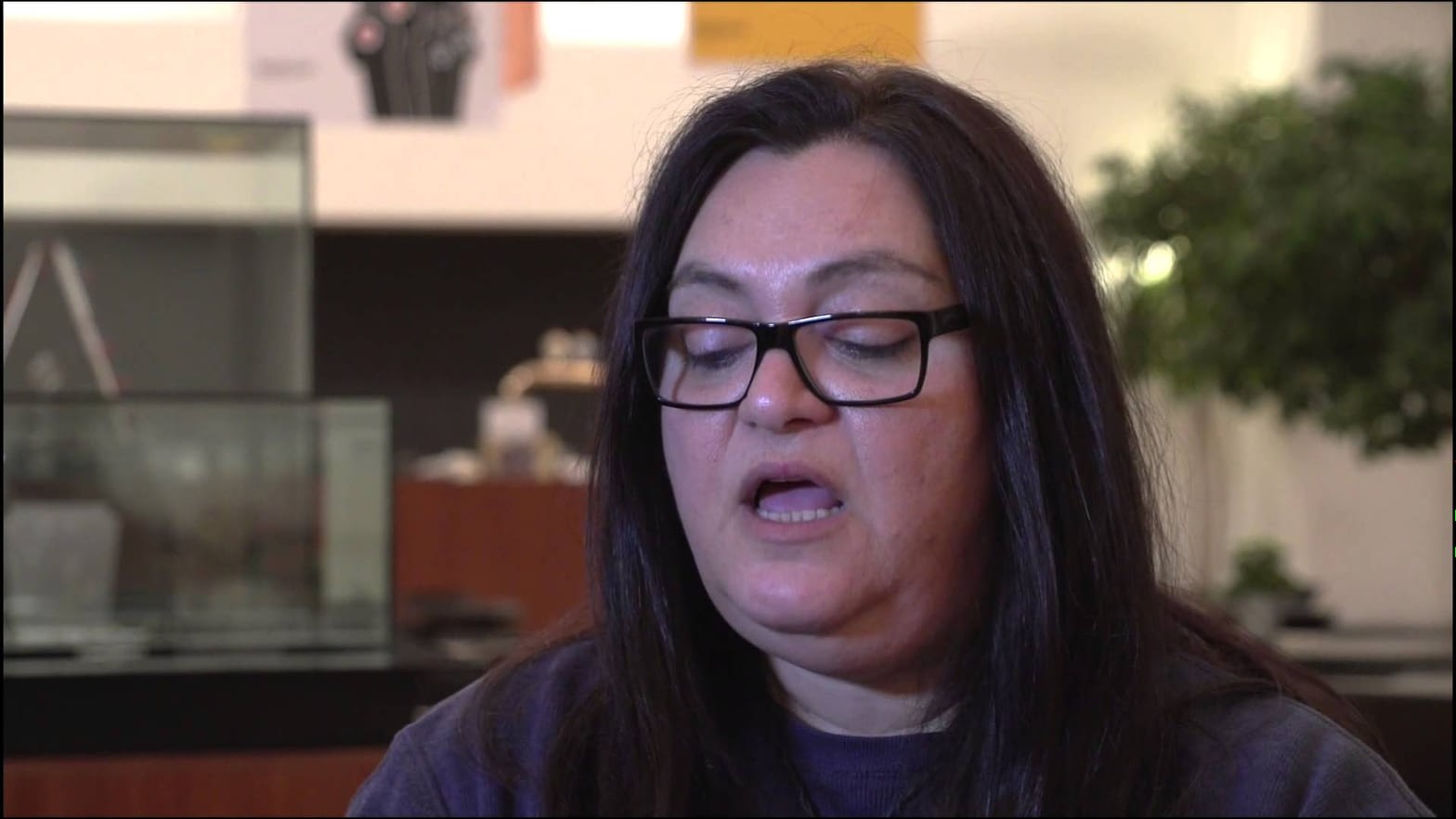 NEW YORK– The Onassis Festival Antigone Now opens on October 13. Artist Maria Papadimitriou and curator of visual arts Yorgos Tzirtzilakis spoke with The National Herald about the impressive site-specific installation Laboratory Antigone which focuses on the performance of the ancient tragedy.

The installation will be on view through December at the Onassis Cultural Center in the Olympic Tower, 645 Fifth Avenue in Midtown Manhattan.

Recorded excerpts of Antigone read by actress Amalia Moutoussi greet the visitors as they enter the installation space.

The use of found objects adds texture, authenticity, and levels of meaning. A wall painted with chalkboard paint features keywords from the play and space for participants to add their own words in chalk and photograph them.

Papadimitriou said that every three or four days, the chalk writing will be wiped away and the process begins again.

As Tzirtzilakis noted, “the Antigone of Maria Papadimitriou is presented as a work in waiting, a work to come, or – to borrow the term Plato employs when talking about his Laws – as a prooimion, a preamble, a preparatory exercise that is necessary for what is to follow. For Plato, any law without a preamble is ‘tyrannical’– and a tragic text deprived of its preliminary condition runs the same risk.”

He continued, “Antigone is thus treated here as a preparation, a possibility that will promote communion with the tragic. In other words, what we have is the exact opposite of what we are used to seeing when we voyeuristically follow the telling of the myth; here is what precedes the event, the very thing that makes the event possible. This piece represents the key moment before the advent, the glow of dawn before the sunrise, or alternately the twilight before darkness. I am talking about the moment of muted density and transition that precedes the tragic delirium, the friction that precedes the collapse, which is banished by today’s ‘voyeuristic’ behavior, and which the Antigone of Maria Papadimitriou aims to challenge.”

In her artist’s statement, Papadimitriou described the inspiration for the work. “A couple of years ago, while returning from a trip to Volos with my friend and colleague at the University of Thessaly, Yorgos Tzirtzilakis, we took a detour to Leivadia to meet our friend, the clarinetist, Yorgos Mangas. At some point, traveling towards Thebes, Yorgos looks distractedly outside the window and says: ‘We are going through a legendary landscape, where bloodthirsty battles took place, a set inhabited by historical symbols.’

Some months ago, I happened to take the same journey, this time in a taxi, and suddenly, upon seeing on that same plane, a three-storied house, deserted like a carcass, I recalled Yorgos’ words. It was a ruined house from the sixties without windows and the way in which the afternoon sun fell on it made it stand out even more so. I gazed at it and in my mind’s eye it started to look like a deserted palace.”

She continued, “So I began contemplating the history of the Theban landscape and its mythical personae, Oedipus and his sister and daughter, Antigone. The deserted palace, which reigns in the calm of the plane, looked more like a facade, a persona from an ancient play and not a common dwelling. The way in which the windows lay naked made it appear like a human figure. It was domineering, suggestive, and at the same time archaic.”

Papadimitriou noted, “This picture disturbed me; and, connecting it to the myth of Antigone in my mind, I pictured figures and moments of action in this mythical setting. The next question was probably inevitable: How was I going to narrate the same myth in a different place and in a different scene? This led me, some days later, to choose the old Volos tannery as a point of reference. After all, Volos had been the common starting point of these travels.

The tannery is also a given place with a powerful ‘staging.’ However, most importantly, therein too lay a sense of death: I would say you could smell death in it, as it was full of hides and processed animal skin. The tannery also has a uniform, renaissance outline, intensified by its wooden ceiling.

“This is how my revelation in the Theban plane became transposed into the dramatic esoteric walls of the tannery,” she said.

As Papadimitriou observed, “my work, as an artist, is to hone in a director’s concept, then materialize it, and turn it into a moment of real sensibility; this is called the ‘Primary Idea,’ which transforms itself, through the artist, into an image.

“In preparation for Antigone yet another question emerged: how to communicate the image of a play in its editing phase, and not as the final result, or more precisely, how to communicate that same question through a picture. After all, Antigone does little else than pose questions to us. So this work is the envisioning of the question and of this ‘primary idea’ that came to me while traveling through the Theban landscape. It is a raw piece of work, like the tragedy itself.

“Most of all, Laboratory Antigone is a thought process; and because of that it has a pedagogical dimension, which calls for the urgent and vital cooperation and unity with others.”

Tzirtzilakis pointed out, “the hides in Laboratory Antigone– in the context of a tragedy with constantly repeated references to the unburied body of Polyneices ravaged by dogs and vultures– become the emblem of a timeless primordial element. If in theatrical tradition the costumes and masks are meant to invest the actor with an identity, the empty hides of Maria Papadimitriou are presented as a means for redefining the body, a preparation for becoming the Other.”

He observed, “the empty hides do not represent a role or character, but rather they are the method of becoming that character. This is why we have not one Antigone but several; entire populations of Antigones on which are inscribed tensions, contrasts, deferrals, falls, passions, desires, and trajectories of flight.”

Laboratory Antigone was specially commissioned by the Onassis Foundation USA in conjunction with the Onassis Festival NY 2016: Antigone Now.