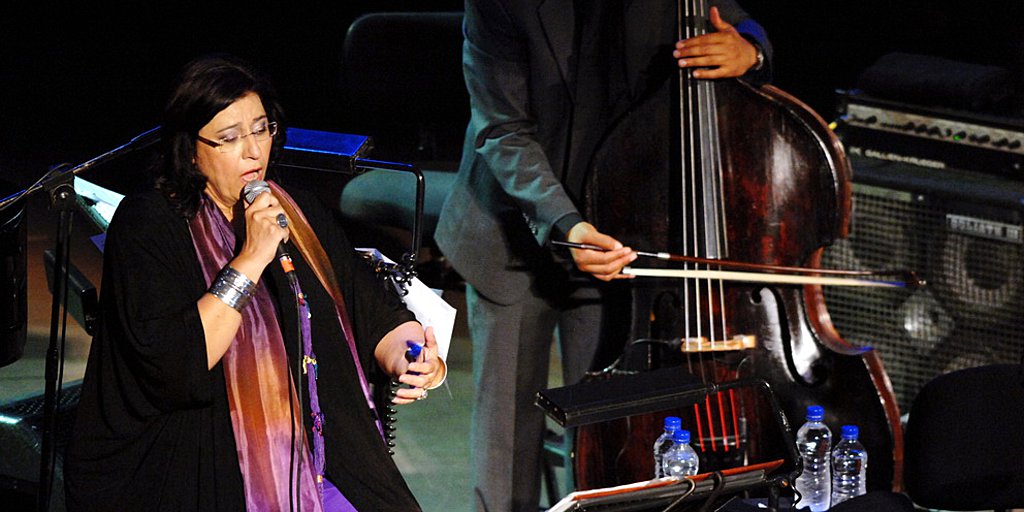 ATHENS – The renowned singing star Maria Farantouri has built an extraordinary career performing some of the most iconic songs by the famous Greek composers including Mikis Theodorakis and Manos Hadjidakis.

She took time out from her busy schedule and spoke with The National Herald about her upcoming concert at Carnegie Hall on May 12. The concert entitled, Maria Farantouri: A Tribute to Mikis Theodorakis, will present not only the most famous works by the composer and that Farantouri herself popularized but also works made famous by Giorgos Dalaras and Bithikotsis, she told TNH.

Associated with legendary Greek composer Mikis Theodorakis and his music for more than 40 years, Farantouri, accompanied by a chamber ensemble, will sing some of his best-loved songs from throughout the composer’s unforgettable oeuvre.

Farantouri told TNH about her previous concerts in the United States and how this latest Carnegie Hall concert came together, “I had performed with Mikis and the ERT orchestra in 1994 at Carnegie Hall and then I performed at universities [in the U.S.] in 2002, then in 2014 I was invited to Princeton with the very well-known American saxophonist Charles Lloyd. He loves Greek music and traditional Greek music, and he also liked my voice. We did a concert in Athens in 2010 and other performances in New York, Washington, and in California- Santa Barbara, L.A., we did many concerts, that was in 2013, and in 2015 NYU invited me to perform there.

“An American, Robert Browning, a promoter/impresario heard about me and had heard Mikis Theodorakis and that the concert was very good at NYU and came to visit me in Athens. He spends his summers in Chania and he met his American wife, Helena in Chania and since then they visit Chania every year. On his way to Chania, he stopped by and told me he heard wonderful things about the concert at NYU and he thought it would be a good idea to introduce me to Carnegie to do a concert as we wanted, a tribute to Theodorakis, and these 2 years he made the proposal and Carnegie accepted and as you know they never put on the same production, only for big stars in America and sometimes they put on shows that are paid by others, but this show is presented by Carnegie Hall itself and I thought it a great honor for me and for our music and for Greece and for our poets and for our Miki, and I thought we would do this tribute to him. And 2 years ago, I didn’t know if Miki would still be with us, but he is and he’s very pleased about the tribute, because as you know I also sing Hadjidakis, rembetika, and in Europe, just last week I was in Amsterdam and in Belgium, there I have an open program, but here I really wanted to do the tribute. It was a wonderful concert we did in 1994, 24 years ago with Miki. This time, we are doing a great selection of songs from all of Miki’s works, the laika, beloved songs, melodic ones and lyrical ones.

“We also have the Archdiocesan Choir with director Evey Simon and 16 great singers who will join in at the end for 5 or 6 songs and we’ll sing together. Theodorakis has written many song cycles, of all the great poets I tried to find the best pieces, the most emblematic, so the audience will hear and sing along and feel the whole history with the songs and our beloved Miki. And at the same time, [to feel] the weight of the poetic word because even the most laika songs, the poets have written them, Livaditis, Christodoulou, Seferis, Elytis, Ritsos, Anagnostakis, all of them. This is our heritage and our spiritual inheritance and I thought this is a good opportunity in New York in a venue that honors me with the invitation to present the best of what I sang as a young girl with Mikis Theodorakis up until now… if you think about it, the value of the project is what brought me to perform in Europe, they invite me to perform because there is a great value to these songs. It is our spiritual Greece.”

Farantouri told TNH, “When I return next time, I will open up the program because both Theodorakis and Hadjidakis are my ‘parents’ and I love Hadjidakis’ work and I have sung his songs and he wrote for me, the famous Persephone, and many other songs that he wrote for my voice, which I sing everywhere. Next time we’ll perform Manos’ beloved songs and Xarchakos’ because I sing rembetika, too.”

Of the Carnegie Hall concert, she said, “We have a wonderful group of musicians performing. Achilleas Wastor, the pianist will play some classical pieces by Mikis, you will hear the Syrto ton Chaniotikon from his classical suite and he connects it with the Zorba theme on solo piano. Then you will hear the solo bouzouki from a lovely piece by Mikis and then a cello solo.”

She noted the concert’s appeal to “our American friends who love Greece, the spiritual Greece and contemporary Greece, as well as the Greek community, our brothers who live so far, I want them to feel proud of Greece.”

“It’s not just my own idea,” Farantouri said, “Others have noted it, too, that we are the only nation that has popular songs based on the great poets. There are some in America like Leonard Cohen and Bob Dylan, of course, he was honored, but our great poets made the song popular. They are not songs at the margins, they are songs that the whole world sang, all the people sang, particularly from the past, but they endure, they endure, just like the rembetika, and Manos’ songs, Mikis’ songs, and in Greece, it unites Greeks, and this is my deep desire for all Greeks to be united and to sing about Romiosini, about our Greece, about all the beauty of Greece and Greek things.”

“The songs are simple and beautiful,” she added, “they’re supported by the poets, to Feggari Magia Mou Kanes Kai Perpato Sta Xena to Tragoudi ths xenitias [the song of exile], a poet wrote this.”

“The choir who will be performing with us is made up of professionals, poets, singers who perform from Byzantine music to contemporary music, and it’s an honor for me to perform with them all and choir director Evey Simon. We have 7 wonderful musicians, soloists performing. Achilleas Wastor, whom I mentioned, and David Lynch is an American saxophonist who for the last 30 years or so has lived in Greece. He knows Greek music very well. Petros Klampanis the fantastic bassist who lives in New York. Christos Rafalides plays the vibraphone, also lives in New York. The amazing Heracles Zakkas, on bouzouki and mandolin, plays all types of Greek music. I have taken care to have the best musicians and it is really a celebration and that is how I want the Greek community to see it and to sing all together for our beautiful homeland which may be suffering through difficulties but in the past went through even worse and overcame the difficulties and will overcome, and slowly we will overcome our problems because that is how we Greeks are. We may lose our way a bit but we will always find it again.”

Farantouri also noted that songs from Mathausen and Axion Esti, will also be preformed, as well as songs made famous by Kazantizidis and Bithikotsis, among other beloved singers of the past. She added that “even Malamas and the younger generation are singing Theodorakis. Our Mikis is classic and everyone sings his songs.”

Carnegie Hall presents Maria Farantouri: A Tribute to Mikis Theodorakis on May 12 at 8 PM in the Stern Auditorium / Perelman Stage. For more information and tickets: https://www.carnegiehall.org/Calendar/2018/05/12/MARIA-FARANTOURI-0800PM

with the Archdiocesan Cathedral of the Holy Trinity Choir, Evey Simon, Director.

KANSAS CITY, Mo. — More than $1,4 million had been raised as of Saturday for a man who spent 43 years behind bars before a judge overturned his conviction in a triple killing.