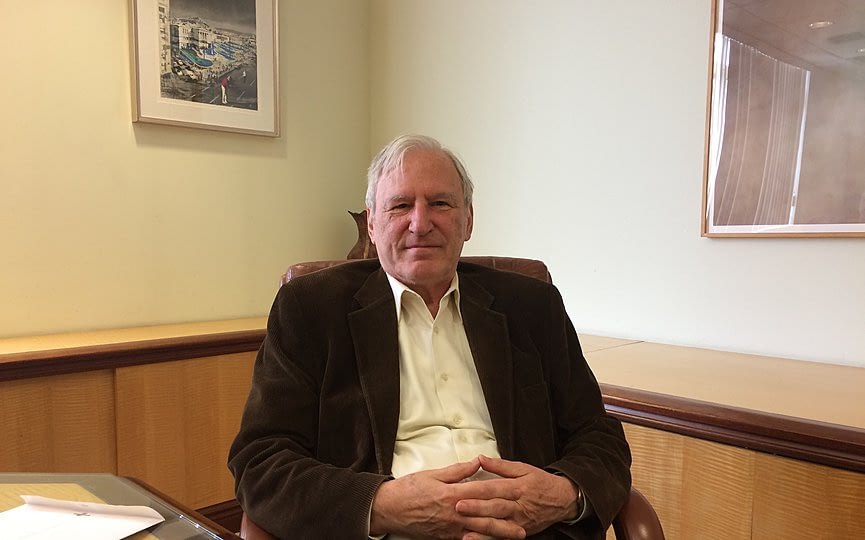 NEW YORK – Professor Anthony Pappas is the Republican candidate for Congress in the 14th Congressional District of New York running against Democratic socialist Alexandria Ocasio-Cortez, but Republican leaders in Queens and the Bronx have withdrawn their support from Pappas, citing his ex-wife’s accusation of domestic violence and a restraining order she had taken out against him, the New York Post reported.

Prof. Pappas, 72, had visited the offices of The National Herald to talk about his campaign platform, “sensible solutions for a kinder, caring world,” and also mentioned his legal issues with his ex-wife and the judicial system in general.

He never expected much support from the Republican Party, and told TNH that running as a Republican was the only way to get on the ballot against the incumbent Democrat Rep. Joe Crowley whom he thought to have faced in the general election.

According to the Post, Pappas “hasn’t gotten a single donation yet” and “also told Queens GOP chairwoman Joann Ariola and Bronx leader Michael Rendino that he put $1,200 in his campaign account, but the government froze it because he owed his ex-wife at least $1 million following their divorce.”

Ariola and Rendino told the Post that Pappas was “unhinged.”

His name will still appear on the ballot on November 6, only because it is too late to have it removed, the Post reported.

An Associate Professor in Economics and Finance at St. John’s University’s Peter J. Tobin College of Business, Pappas earned his BS in Economics and Mathematics at the Massachusetts Institute of Technology and then continued his studies at Yale University earning an MA, MPhil, and PhD in Economics at the illustrious Ivy League institution. The son of immigrant parents from Epirus, he told TNH that one of classmates at Yale was Janet Yellen, the former Chair of the Federal Reserve.

The key issues for his campaign focus on economic and social issues that have long been in the news, but politicians never seem to reform or resolve. Among the issues, Pappas noted the importance of establishing a fairer tax system with progressive taxation on corporate profits, establishing tax brackets so that huge corporate profits are taxed at a higher rate.

In a conference call in early September, the GOP leaders asked for an update on his campaign during which Pappas revealed that he could not spend the money in the campaign account due to the money owed to his ex-wife in their divorce settlement, the Post reported, adding Ariola’s recollections of the conversation, “Pappas said, ‘My wife said I beat her and there was a restraining order.’ We said, ‘Based on what you told us we can’t support you for this congressional seat.’”

Pappas, in an interview with the Post, denied that he beat his wife “but admitted he was involuntarily committed three times.”

He also denied the accusation in an interview with TNH, noting that if he had beaten his wife, as severely as she had alleged, he would have been arrested at the time and would be serving jail time. Pappas referred to the judge’s grudge against him and told TNH that establishing checks and balances over the judiciary branch of the government, holding judges accountable, and overturning judicial immunity were on the top of his list of needed reforms. His personal experience having gone through a divorce years ago informed his decision to run and seek to reform the system that needs to keep up with the times.

Pappas shared his story with TNH in a 2014 interview as well and noted that since then he has seen the toll court decisions have taken on people’s lives, especially with regard to divorce and custody issues, pointing out several instances of people committing suicide over such issues. Concerning the accountability of judges, Pappas told TNH, “No one is above the law.”

Though the divorce was settled in 2014, the Post reported that “the restraining order remains in effect,” and that the Bronx Times first reported on the withdrawal of GOP support for Pappas.

Ariola told the Post that a “lesson was learned” and background checks will be conducted on all future candidates, adding that she receives “harassing” emails from Pappas, and “our conservations with Mr. Pappas are over.”

According to campaign reports from the Federal Elections Commission, Pappas for Congress raised $1,935 and spent none of it, the Post reported.