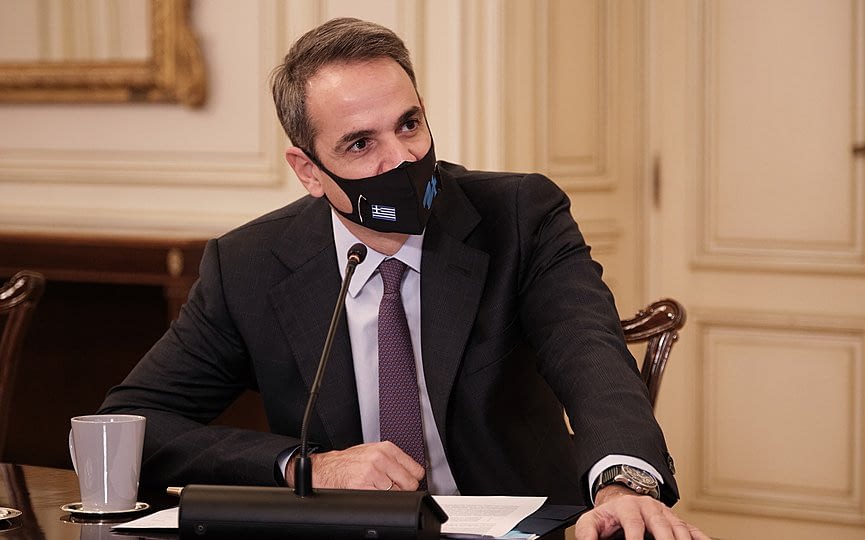 Prime Minister Kyriakos Mitsotakis attends the first presentation of the 14 institutions that will participate in the Forum "Greece in 2040". (Photo by Eurokinssi/ Dimitris Papamitsos)

ATHENS — Prime Minister Kyriakos Mitsotakis and three other EU heads of government on Friday sent a letter to European Commission President Ursula von der Leyen, asking her to engage early with pharmaceutical firms in order to pre-empt possible problems down the line and ensure the approval and distribution of vaccines in the EU, focusing particularly on the Johnson & Johnson vaccine. In addition to Mitsotakis, the letter was signed by Austian Chancellor Sebastian Kurz, the Prime Minister of the Czech Republic Andrej Babis and the Prime Minister of Denmark Mette Frederiksen.

The full letter is as follows:

"We are very pleased that there is now a united, strong pressure on the vaccine producers. A special thanks to you for your personal engagement and for sending such a strong message to Astra-Zeneca about their unacceptable behavior. It seems they now understand the gravity of the situation.

As you rightly pointed out in your letter together with the President of the Council Mr. António Costa, we have a broad range of challenges at hand regarding the supply of vaccines. On the basis of our experiences so far, we believe it is important to engage in an early dialogue with the producers of upcoming vaccines to mitigate potential problems before they arise. As an example, the upcoming vaccine from Johnson & Johnson may be a potential game changer due to easier storage and transport as well as requirement of only one dose. However, we have been informed about the fact that the Johnson & Johnson vaccine apparently needs to be shipped to the US for filling and finish. If this could risk EU access to the vaccines, we should consider addressing the issue already now with a view to finding solutions with the company in order to safeguard European supply. It is our understanding that capacity is available within the EU. In view of the importance attached to these issues, we would encourage an early dialogue at the highest levels.

Time is of the essence. Therefore, we need to keep up the speed in contract negotiations with all new promising candidates, such as for instance Novavax who have just announced high efficacy of their vaccine, or Valneva, with whom the Commission has also concluded exploratory talks. And needless to say, approval of all new vaccines will need to be as swift as possible while respecting necessary health requirements.

We were also pleased to learn that the Commission has now in principle recognized that there could be a way forward for pre-authorization distribution. It is important that no time is lost, so the rollout of vaccines can take place as fast as possible. Hopefully, this can be applied to new vaccines such as Johnson & Johnson.

We look forward to continuing the fruitful cooperation with you in the coming weeks and months that will be crucial for us all."