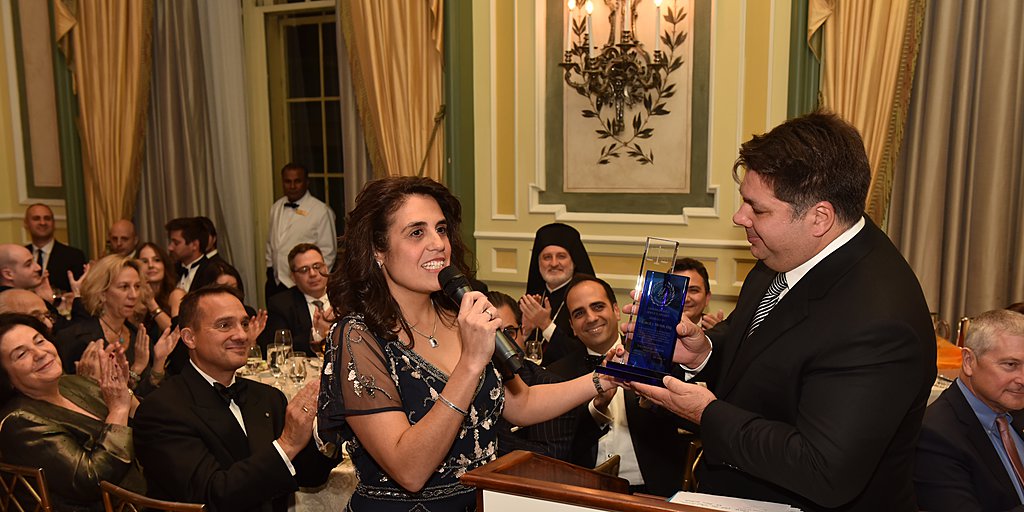 NEW YORK – The Hellenic Lawyers Association (HLA) held its 31st Annual Gala on November 1 at the Pierre Hotel in Manhattan. This year’s event honored George James Tsunis, Founder, Chairman and CEO of Chartwell Hotels, LLC, Chairman of the Battery Park City Authority, and Chairman of the Board of Nassau University Medical Center. Also an attorney, developer, philanthropist, and public policy advisor with a strong interest in the intersection of economic and foreign affairs, Tsunis received the HLA’s Distinguished Service Award.

HLA President Chrisanthy N. Zapantis-Melis, Esq., gave the welcoming remarks and greetings to the many notable guests present. She noted the many accomplishments of the organization through her first year as president, including the joint Christmas party with the Hellenic Medical Society of New York, the annual Vasilopita of the Hellenic professional organizations, and the many networking events for members, including collaborations with other bar associations offering expanded networking opportunities, and thanked all those who support HLA’s efforts and help make such events possible.

Zapantis-Melis also thanked her husband, Dr. Demetri Melis, her parents and brother and HLA 2nd Vice President George Zapantis for all their support. She then introduced His Eminence Archbishop Elpidophoros of America to give the invocation.

U.S. Senator Robert Menendez of New Jersey, the ranking member of the Senate Foreign Relations Committee, introduced the honoree, beginning his remarks with “Kalispera” which received a warm round of applause from the Greek speakers in the audience. Sen. Menendez noted that “George James Tsunis is the personification of the American dream” and his story is “an extraordinary American success story.”

An Archon of the Ecumenical Patriarchate and a recipient of the Saint Paul’s Medal, Tsunis, the son of Greek immigrants James (Demetris) and Eleni Tsunis, earned a BA from New York University in 1989 and a JD from St. John’s University School of Law in 1992. A practicing attorney, he was a partner at the law firm of Rivkin Radler LLP. Tsunis married Olga J. Antzoulis in November 2004. They live on Long Island with their three children, James, Eleni, and Yanna. Tsunis also has two sisters, Anastasia and Vicki, who both became public school teachers.

Sen. Menendez also noted that Tsunis was the youngest Grand Marshall of the New York Greek Independence Day Parade in 2014 when he led off the parade with Sen. Charles Schumer. Among his philanthropic efforts, Tsunis established the George and Olga Tsunis Fellowship for Cancer Prevention at Stony Brook University Hospital, the James and Eleni Tsunis Endowed Distinguished Academic Scholarship at Hofstra University, and several scholarships, demonstrating his belief in the importance of education.

Sen. Menendez said that he was proud to call Tsunis his friend and concluded his remarks by recalling Mother Theresa’s words when she accepted the Congressional Medal of Honor, noting that all the awards were not important, but how one has lived their life.

In his acceptance speech, Tsunis thanked Sen. Menendez whom he called the greatest Philhellene of his generation and noted that he had been in meetings with New York Governor Andrew Cuomo all day and did not have a prepared speech for the event. Speaking from his heart, he noted how honored he was to receive the award, and thanked his family, his mother and his wife who were both present at the event. He also thanked Archbishop Elpidophoros and recalled when he was a GOYA members at St. Paraskevi in Greenlawn, welcoming Archbishop Iakovos of blessed memory and asking his father how he should great His Eminence and his father told him, “I wish the Lord would cut years from us and give them to you.”

Tsunis then noted that in his meeting with Gov. Cuomo, they had discussed St. Nicholas at the World Trade Center and the completion of the church is a priority. He also pointed out that he is on the committee for the statue of Mother Cabrini who is the patron saint of immigrants, adding that all our family’s share this immigrant experience and how they came to America because of the rights we take for granted, rights he hopes will one day extend to places like Cuba and to a united Cyprus. Tsunis also addressed the inequality which persists in society and how we will be judged by how we treat those less fortunate. He noted the staggering number of refugees in the world, from Venezuela and Syria among other nations, and how we are all obligated to stand up for those displaced persons, 80 percent of whom are women and children.

His Eminence Archbishop Elidophoros then spoke about lawyers in the Gospel, especially in the Gospel according to St. Luke, noting the parable of the Good Samaritan, when the lawyer asked Jesus who is a neighbor, and after Jesus told the parable, He asked the lawyer who was the neighbor? The lawyer replied, the one who showed mercy, His Eminence said that the honoree shows mercy and “we are blessed by your contributions to Hellenism and the wider community.”

New York State Senator Andrew Gounardes then presented a proclamation to Tsunis from the legislature with his colleagues Assemblymembers Aravella Simotas and Nicole Malliotakis.

Dinner and dancing followed the presentation. A silent auction was also held with many unique items available for bidding.

HLA President Zapantis-Melis told The National Herald, “I am proud to serve as president of the Hellenic Lawyers Association, and I thank His Eminence Archbishop Elpidophoros, Sen. Robert Menendez, honoree George Tsunis, the judges, and all our members who attended and made our gala so special this year.”