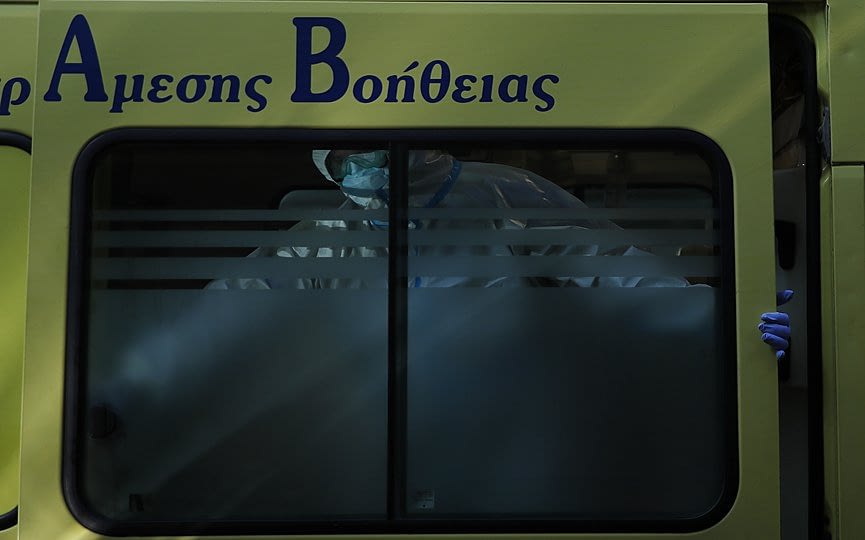 FILE- A paramedic wearing a suit to protect against coronavirus, closes the door of an ambulance as an elderly woman from a nursing home, where dozens of residents people have been found positive in COVID-19, is being transferred to a hospital in Athens, Thursday, Oct. 1, 2020. (AP Photo/Thanassis Stavrakis)

ATHENS — The island of Kythnos, near Attica, will go under special restrictive measures as of 05:00 on Friday to limit the spread of novel coronavirus infections, authorities announced on Thursday.

The restrictions will last through October 16, and were approved by Civil Protection Deputy Minister Nikos Hardalias following the recommendation of the Health Ministry's coronavirus advisory group.

All stores of health interest, therefore, will be shut from 12 midnight to 05:00 the following morning, and all parties, religious festivals and open markets are suspended. Gathering of over 9 individuals in public and private spaces is forbidden, while at restaurants a maximum of 4 people may sit at the same table; if first-degree relatives, the maximum is 6 people.

The wearing of facial masks is obligatory, whether outdoors or indoors, while companies affected by the measures may suspend their staff's contracts following the agreement of the Finance Ministry.

In addition to Kythnos, three doctors and two nurses were found infected by the virus at the the Thoracic Surgery Clinic of the "Sotiria" hospital, which holds the weekend emergency rotation on Saturday (Oct. 3). For preventative reasons, all staff at the Clinic (38 people) are being tested for the virus, while the clinic was disinfected and the 4 patients in the facility remain in place.

Meanwhile, the National Public Health Organization (EODY) announced 411 new coronavirus infections on Thursday of which 68 are linked to known clusters and 26 were identified at entry points to Greece.

The total infections since late February, when the pandemic broke out in Greece, amount to 18,886, of whom 2,961 are linked to travel abroad and 7,755 to already known cases.

A total of 89 patients are intubated; 86.5 pct of these have some underlying cause or are 70 years or older, while 28 are women. Another 214 patients have been discharged from ICUs since the start of the pandemic.

There are 2 more confirmed deaths and 393 fatalities in total. Their median age was 78 years and 96.7 pct had an underlying cause and/or were 70 years old or older. Some 144 of the deceased were women.

In terms of distribution, 40 are related to a nursing home in Athens, and overall 272 were identified in Attica Region. Of the rest, the regions with highest concentrations included Achaia in the Peloponnese and Boeotia in central Greece (9 each), and Thessaloniki (7).

Additionally, on Thursday an Athens prosecutor ordered an investigation into the coronavirus outbreak at a nursing home in Agios Panteleimonas, central Athens, where 40 people were found infected on Wednesday. EODY confirmed that patients who were infected were transferred to specialized hospitals.

The facilities were visited on Wednesday by Hardalias and infectious diseases professor Sotiris Tsiodras. The facility is under restrictive measures as of Wednesday night, with limited entry and exit visits except for the staff, which will be rotated, and the vendors, who will not be allwoed entry.