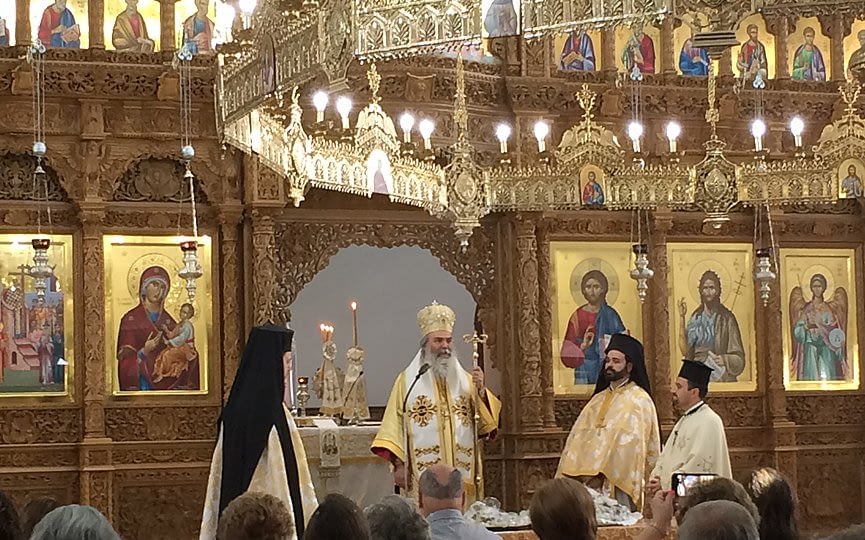 Archbishop Demetrios told The National Herald, that the new Church of the Transfiguration will be much better and nicer than it was before.

“Due to the catastrophe,” he said, “in the interior of the church from the great fire we were forced to perform a small service in the courtyard, while the Great Vespers and the Divine Liturgy will be performed at Holy Cross in Whitestone.”

“By this time next year, with the help of God, the celebrations will be held in the new Church of the Transfiguration, which I am sure will be a real gem. From the destruction caused by the fire something very beautiful will emerge. This is also the message I would like to convey to the Greek community,” His Eminence said.

Fr. George thanked Archbishop Demetrios for his support in the difficult times that the church and the community are going through, and for the unconditional love and concern shown.

Following the blessing, the Great Vespers for the Transfiguration took place at Holy Cross where presiding priest Fr. Dionysios Anagnostopoulos welcomed the community as well as several priests from many churches in the area as well as Greece. 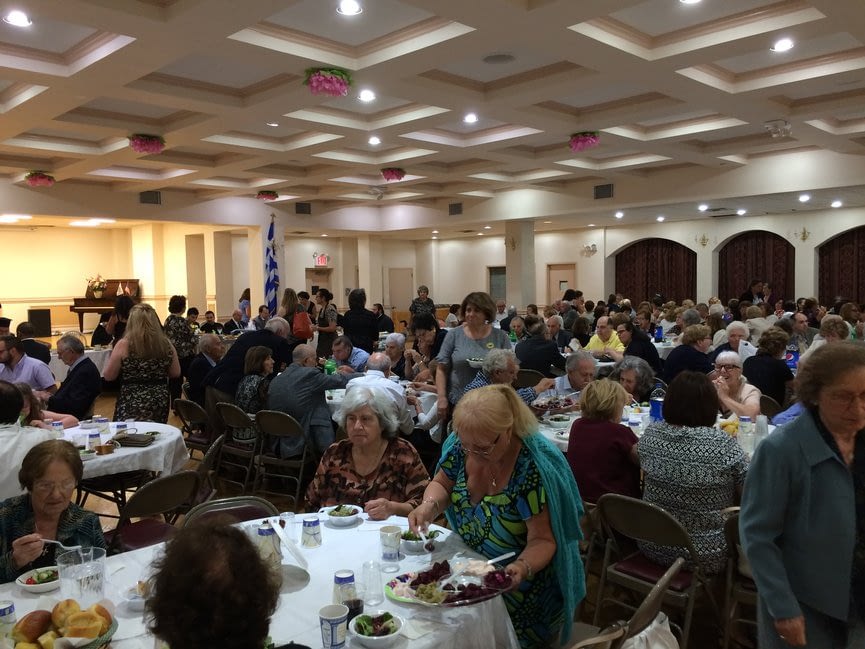 The dinner following the Great Vespers for the Transfiguration of Christ at the Vasilios and Athanasia Kartsonis Hall of Holy Cross Church Whitestone. Photo by Eleni Sakellis

The President of the parish council of Holy Cross, Effie Karalekas, pointed out how happy and emotional the whole community felt to celebrate the Great Vespers and the Divine Liturgy of the Transfiguration of the Savior in the Whitestone church.

The dinner following the Great Vespers for the Transfiguration of Christ at the Vasilios and Athanasia Kartsonis Hall of Holy Cross Church Whitestone. Photo by Eleni Sakellis

“It is a great honor,” she said, “to have the community of Corona with us today and to celebrate all together the grace of our Lord Jesus Christ. We wish wholeheartedly for the damage to be repaired as soon as possible at the historic and holy Church of the Transfiguration.”

The Consul of Greece in New York, Manos Koubarakis, who was also present at the Great Vespers, told TNH that he wished all the Greek community many years with health, happiness, and love on behalf of the Consulate General and expressed the hope that the serious damage will be repaired as soon as possible at the Church of the Transfiguration of the Savior from the recent fire, and next year, for all to celebrate together in Corona.

A dinner, free to all in attendance, followed the vespers in the Vasilios and Athanasia Kartsonis Hall at Holy Cross. Archbishop Demetrios noted that the dinner was the best meal he had ever tasted following a vespers service. Fr. George thanked the Holy Cross community and noted the tremendous hospitality the community of Corona has received from the Whitestone community including the fact that Fr. Dionysios spent three days helping to prepare the food with the volunteers at Holy Cross.

The Metropolitan of Adrianople, Amphilochios presided over the Divine Liturgy for the Transfiguration of Christ at Holy Cross Church in Whitestone. Photo by Eleni Sakellis

The Divine Liturgy was celebrated on August 6 for the feast of the Transfiguration with His Eminence the Metropolitan of Adrianople, Amphilochios, who came from Greece to attend the celebrations for St. Irene Chrysovalantou last week, presiding at Holy Cross Church. He was impressed and moved to see so many people in attendance at the liturgy and noted the importance of the holiday and of following Christ completely.
A luncheon, also free to all in attendance, followed the Divine Liturgy.

The Divine Liturgy at Holy Cross Church in Whitestone for the Transfiguration of Christ. Photo by Eleni Sakellis