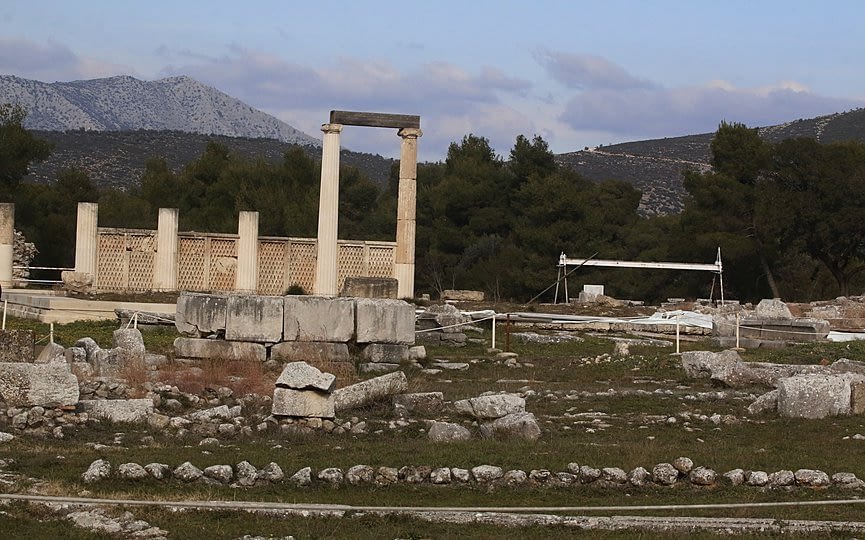 A view of the ruins of the Sanctuary of Asclepius at Epidaurus. (Photo: Eurokinissi/Vsilis Papadopoulos)

In the abstract of the study, Sneed writes, “Ancient Greece is well known for its many temples and sanctuaries, including several dedicated to healing and associated cults. Informed by disability studies, this article analyzes the architecture of public spaces and facilities, alongside epigraphic, iconographic and literary evidence, to argue that the ancient Greeks sought to ensure the accessibility of healing sanctuaries. Even without a framework of civil rights as we understand them today, the builders of these sites made architectural choices that enabled individuals with impaired mobility to access these spaces. It is hoped that this research may stimulate further investigations into accessibility at other sites in the Classical world and beyond.”

The Sanctuary was “built in the sixth century BC to honor the Greek god of medicine and healing, [and] the temple underwent significant renovations around 370 BC,” Smithsonian reported.

Besides noting the ramps, Sneed “cites archaeological and written evidence suggesting the Greeks recognized physical disability,” Smithsonian reported, adding that “artifacts and imagery from the period feature people stooped over, moving with difficulty or walking with canes; even the Greek god Hephaestus is described as having a limp,” and “offerings found at various healing temples include votive carvings of worshippers’ affected body parts, from legs to feet, hands and ears.”

“It seems clear that the most reasonable explanation for [these] ramps is that they were intended to help mobility-impaired visitors access the spaces that they needed to experience religious healing,” Sneed told Live Science, adding that “this shouldn't surprise us, really: The Greeks built these spaces for disabled people, and they built the spaces so that their target visitor could access them,” Smithsonian reported.

There are scholars who are not convinced that the ramps were only for accessibility for disabled people, but as Katja Sporn, head of the German Archaeological Institute’s Athens department, told Science Magazine’s Andrew Curry, “because the ramps were predominantly located in one area (as noted in Sneed’s study), they could simply represent a short-lived, localized architectural trend,” Smithsonian reported, adding that “according to Sporn, the ramps were most likely multipurpose conveniences designed to ‘help everyone, also disabled people, walk into temples better.’”

Architectural historian at the University of Notre Dame Alessandro Pierattini, in an interview with Gizmodo’s George Dvorsky said “that the study doesn’t offer enough evidence of ramps at the hundreds of other healing sites in the region,” Smithsonian reported.

Pierattini added that the “whole sample of known asclepieia should have been examined and compared to other sanctuaries,” and “more case studies should be examined in order to demonstrate that there were patterns linking the percentage of legs in the [anatomical offerings] to the presence of ramps,” Smithsonian reported.

Sneed said in an interview with Gizmodo, “When classicists discuss these ramps, they explain them as a means of conveying sacrificial animals, statues, and other dedications, or building materials, and it’s true, we can’t rule those additional uses out. This is the idea behind Universal Design (UD) in modern architecture, that you build things that will benefit the most numbers of people. I think that the ramps, especially at healing sanctuaries, were built with disabled people in mind, but they would have been multifunctional,” Smithsonian reported.

“Despite their culture’s emphasis on the aesthetics of idealized beauty and symmetry, the ancient Greeks didn’t treat impaired individuals like outcasts,” Smithsonian reported, noting that “wounded warriors were treated especially well, as vulnerability was considered a virtue. And, during the fourth century BC, Athens offered government assistance programs for disabled individuals.”

Sneed told Live Science, “The city provided a regular maintenance payment for adult male citizens who were disabled and could not support themselves because of their disability. We know about this payment primarily because we have a speech, delivered by a man who says he walks with the aid of two crutches,” Smithsonian reported, adding that “according to Sneed, the man, who stood accused of welfare fraud, was ‘defending both his disability and his inability to support himself because of it.’”