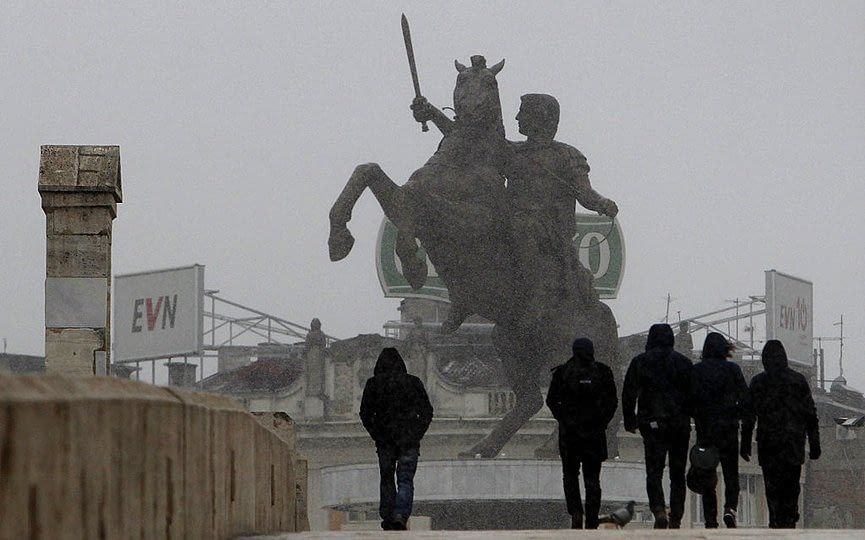 SKOPJE, North Macedonia (AP) — Efforts by North Macedonia’s government to re-label public statues of historic figures, under a deal with neighboring Greece, have gotten off to a rocky start.

Overnight, vandals removed plaques installed Thursday on three statues in the capital, Skopje, of ancient Greek warrior-king Alexander the Great and his family, which clarified that they belong to ancient Greek history.

One of the plaques removed was retrieved later Friday. No arrests were made.

Skopje denied both claims, but at the same time the previous, conservative government erected several statues of Alexander and his family in prominent public areas to boost the small Balkan nation’s national identity.

Under a breakthrough deal to normalize relations after nearly 30 years, the country was renamed North Macedonia this year. In return, Greece agreed to back its NATO and European Union accession bids.

About a dozen statues all over North Macedonia are getting new labels, including a huge equestrian one in central Skopje of Alexander, who lived in the 4th century B.C.

The government this week also instructed local authorities to remove copies of an ancient symbol known as the Sun of Vergina from all public buildings and areas.

The 16-rayed sun is associated with Alexander’s family and was found in a royal tomb in northern Greece. From 1992-1995, it was put on the flag of then-Macedonia, infuriating Greece.

Some in North Macedonia resent the changes.

“Nobody can tell people what to feel,” she told The Associated Press on Friday. “Alexander the Great and the Vergina Sun are also mine, they belong to all of us.”