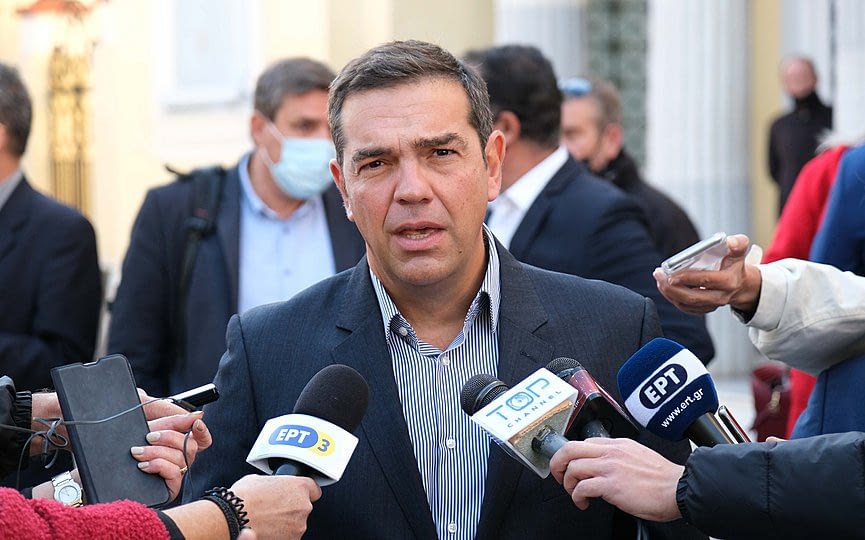 DRAMA, Greece — "The ministers should stop talking, get to grips with the reality and cease trying to dress up a tragic state of affairs. Above all, they must stop telling us that they are 'celebrating', stop telling us that we are fortunate we do not have more ICUs because then we would have more dead and stop telling us that things in hospitals are going well," main opposition SYRIZA-Progressive Alliance leader Alexis Tsipras said on Friday, during his visit to the hospital of the northern Greek city of Drama, where he said the situation was "out of control".

He called on ministers "to understand that human life is more precious than private profits," and stressed that "northern Greece is bleeding at this time." Tsipras noted that all ICU beds in the region were full, with patients being sent elsewhere, either by ambulance to the hospitals of Patras and Ioannina or by plane to Athens, while two major private hospitals in Thessaloniki, the Interbalkan and Aghios Loukas remain closed, along with hundreds of beds in private recovery clinics, which might have been used but were also closed.

"Even the private clinics that were 'requisitioned' were not really requisitioned but rented at double the normal rate in order for the private owners to get more money.The conditions that northern Greece is experiencing at this time may also come to the south. We sincerely hope there is a reduction in the number of cases over the next period but the burden on public hospitals, in terms of the serious cases, is unrelenting," he said.

Tsipras said he had hoped that Greece could avoid scenes like those witnessed in northern Italy during the first wave of the pandemic but had unfortunately been proved wrong. "The situation in northern Greece and especially in the hospital of Drama is out of control. Effectively, the hospital of Drama has turned into a hospital for Covid-19 patients and the doctors' and nurses' descriptions were shocking. We must see if there can be solutions and actions to protect public health," he noted.

In his meeting with the president of the hospital's employees' union, Yannis Papadopoulos, Tsipras was told that the staff were at the end of their tether. Twenty-five doctors and 80 nurses have been infected, two are seriously ill and intubated at Alexandroupolis hospital and, apart from a 52-year-old nurse who died of the virus, the husband of another member of the staff had also died.

The president also raised issues of funding, noting that this had been cut by up to 50 pct during the bailout programme years, as well as staff shortages and a lack of equipment, and called for the inclusion of hospital staff – including cleaners – in the arduous and hazardous professions category for pension purposes.

Sakellaropoulou speaks on the phone with director of Drama hospital

President of the Hellenic Republic Katerina Sakellaropoulou spoke on the phone on Friday with the director of the hospital of Drama, Thessalonikia Karatzoglou, who briefed her on treatment and hospitalisation conditions at the hospital due to a spike in COVID-19 cases.

Sakellaropoulou expressed her support and asked the director to relay her thanks and solidarity to the hospital's staff for their tremendous effort.