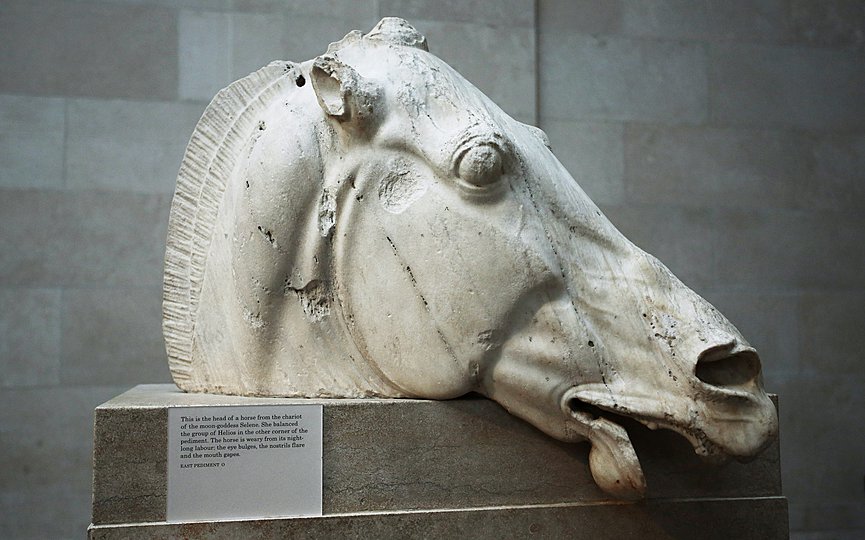 Two hundred years after the Revolution of 1821 and the birth of Modern Greece, our nation still suffers an open wound. This cannot continue. The stolen Parthenon Marbles must be repatriated.

The Parthenon Marbles that were ‘stolen’ according to the characterization of Prime Minister Kyriakos Mitsotakis of Greece, are not just any sculptures. They are not like other works of art exhibited in various museums around the world.

The Marbles are part of our national identity and constitute the bridge of Hellenism across the ages, a physical manifestation of the continuity of Hellenic history from ancient times down to our times, as Mitsotakis declared.

The current situation is a remnant of the Ottoman yoke and colonialism, the political conception of the then-British Empire.

It is a national wound that infringes on the dignity of every Greek and is unacceptably derogatory to the Nation. That can no longer be allowed to continue.

As for the status of the Parthenon Marbles in the realm of art history, there is no other work of art in the world that is such an integral part of an existing monument, and that is so powerfully identified with only one nation: It is the Parthenon Frieze that was stolen, not this and that metope or this and that group of panels. The Parthenon and the marbles form a unity – and their separation is an artistic and historic crime.

Prime Minister Mitsotakis, in cooperation with the Minister of Culture Lina Mendoni, is now raising formally and convincingly the subject of the return of the Parthenon Marbles to their natural place, the Acropolis Museum. He did so in a speech to UNESCO and in an interview in a British newspaper, apparently with the aim of stirring up public opinion in the country that stole them.

“Our stance is clear: the marbles were stolen in the 19th century, they belong to the Acropolis Museum,” he stated in the newspaper, The Telegraph.

They were stolen in 1801-1805 by Lord Elgin, the British ambassador to the Ottoman Empire.

They were taken, supposedly, under the authority of a ‘firman’ – a formal Ottoman state document – which researchers recently declared…never existed.

As if the Sublime Porte could appreciate their value or was interested in something that
belonged to the Greek people.

Whatever the state of such research, the British have relied on that argument to ‘legitimize’ the theft. The authorities rely on that story to uphold their ‘right’ to hold the Marbles – according to the words of the current UK Prime Minister – at the British Museum.

Once upon a time, their argument for continuing to hold them captive was also based on the fact that until 2009 Greece did not have the proper facilities to house them.

They claimed that the British Museum protected the Marbles from people and from the elements – and urban pollution. Their exile ‘saved’ them, so that they could be seen in London by millions of visitors.
Both of these allegations were not without relevance.

As of 2009, however, when the doors of the Acropolis Museum opened, one of the top museums in the world, these claims no longer apply.

Their natural home – a magnificent space on the third floor of their proper museum – awaits them, near the Acropolis, just opposite the Parthenon.

“For one to be able to see the Parthenon Marbles in that place, in their birthplace, visually connected to the monument that gives them their universal brilliance, is something very important,” Mitsotakis added, “but as long as part of the collection remains ‘exiled’ in

London, this dimension will not be fully appreciated.”

The Prime Minister told The Telegraph, “we need to discuss this issue seriously and with
sincerity… Refusing to discuss the issue of the Parthenon Marbles appears to me as being an anachronistic approach, considering all that’s happened regarding the return of cultural treasures.”

And indeed, it is “an anachronistic approach.” It reflects the practices of the 19th and perhaps the 20th century – but not the 21st century, a rapidly changing world, free of colonialism’s
perceptions, prejudices, and practices. In a world that is forced to make amends the unacceptable acts of the past.

We all understand the political side of the issue, the possible reactions that the Johnson government would face if he proceeded to effect the restoration of the stolen goods to their rightful owners, the people of Greece and Greece itself.

First of all, the Greek Prime Minister realizes and understands it. That’s why he left open the window for doing certain things, acts of goodwill, such as sending other rare Greek works of art to London for special exhibitions and other measures that will be politically expedient for Johnson.

After the intervention of the Greek Prime Minister and his personal commitment to
bring the issue officially to his English counterpart, a new phase has been opened in the campaign to heal this national wound, restoring the Parthenon Marbles to the place for which they were created.

Sooner or later, this will happen. It’s only a matter of time.

For us, it is an issue of special significance. It is a matter of our national identity for which
we will never get tired of fighting. The matter is now in Boris Johnson’s hands. It is now time for him to demonstrate courage and take political responsibility and solve the problem now, when he will probably be able to secure positive terms instead of waiting for later, when he or his successor will be forced under the weight of the issue to restore the Parthenon Marbles to Greece and place them on the third floor of the Acropolis Museum, in view of the Parthenon from which they were stolen.

PS: For reasons of complete transparency, I note that I am a member of the Board of Directors of the Acropolis Museum.