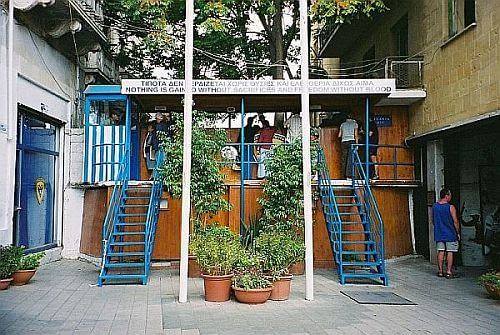 The eyewitness testimony of two American Near East Relief workers, Dr. Mark Ward and Frank D. Yowell became known in Constantinople, as the Pontian Greeks demanded the intervention of the United States to get the Turkish Nationalists (also known as the Kemalists)  to stop the deportations and massacres of their fellow compatriots who lived along the shores of the Black Sea.

The Central Committee of the Greek Dioceses of Pontus demanded justice for its people.

The Central Committee of the Greek Dioceses of Pontus based in Constantinople appealed to President Warren Harding on May 20, 1922.

They offered 10 conditions that should have been imposed on Turkey to stop the massacres and to save the Greek race in Pontus from complete destruction. These important terms follow:

1. Immediate cessation of the massacres
2. Urgent liberation and repatriation of all deportees and civil prisoners
3. Release of all those who are serving in the regiments “Amele Tabourou” (labor battalions)
4. Release of all political prisoners and annulment of all decisions given by the fatal ” Courts of Independence” against the life and property of the Christians.
5. Free return to Pontus of all the Greeks, natives of his district, whatever reasons and dates of their removal maybe
6. To oblige the Mussulman immigrants, who were taken there from other places and established in the country by the Turkish Government, with a view to change its ethnological character to leave Pontus
7. Reparations of all damages and injuries inflicted to the Christians by the Turks since 1914 up to the enforcement of the present claims
8. General cancelling of all the official and private acts of violence such as seizure, confiscation, spoliation transfer of Greek movable and immovable property, under whatever denomination it may be, to names of the Turks
9. Arrest and punishment of the principal authors of massacres and devastation
10. Formation of Pontus to an autonomous country under the suzerainty of H.M the Sultan, and under the effective and efficacious protectorate of one or all the Allied Powers together, with all rights for all the native populations enjoying a proportional participation to the legislative and administrative authority, as well as to the public security and other employment. This proportion is to be based on the respective pre-war lists, so as not to let go the immense human losses which were the result of the Turkish massacres since eight consecutive years.”

This Pontian organization hoped that its appeal to President Harding would have been favorably received and the conditions that they demanded would be imposed on Turkey.

The Greeks employed in the labor battalions were treated harshly, faced starvation, slept outdoors and worked in extreme temperatures. Working in a labor battalion was akin to a death sentence.

The Courts of Independence created by the Kemalists summarily tried and executed many of the Pontian Greek elite in Amassia in August-September 1921 accusing them of seeking to establish an independent Pontic state. Destroying this elite would make it easier for the Kemalists to kill the surviving Greek population.

Topal Osman and his henchmen looted and burned many Greek villages and massacred Greeks in Pontus. Some Pontian Greeks took to the mountains where they waged a guerilla war against the Kemalists during late 1921-early 1922. In the end, they succumbed to the superior force of the Turkish nationalists.

Those responsible for ordering the deportation and massacres of the Greek population should have been arrested, tried and sentenced by a tribunal created perhaps by the Ottoman Government with the support of the allied powers in Constantinople.

In 1919, the Ottoman State tried members of the Committee of Union and Progress (Young Turks) for the Armenian massacres during the First World War.

Some received long prison sentences, others were sentenced to death in absentia (for example, wartime leaders Enver, Talaat and Djemal Pashas escaped to Germany) and a few were executed.

The Pontian Greeks demanded an autonomous territory under the rule of the Sultan in Constantinople and also having the protection of the major powers.

The allied powers (Britain, France and Italy) already occupied Constantinople and were in a position to impose its power upon the Sultan’s Government.

At this time, Turkey had two rival governments with the official one under the control of  the Sultan whereas the rebel one under Mustapha Kemal was located in Angora (Ankara) in Asia Minor.

The rejection of the Treaty of Sevres by the Kemalists and its non-ratification by the allies would make it difficult for the Pontians to achieve any of their demands from a legal standpoint.

The allies tried unsuccessfully in 1921 and 1922 to modify the Treaty of Sevres. Even if they had shown sympathy for the plight of the Greeks but couldn’t intervene as they had adopted a neutral stance in the second phase of the Greek-Turkish war. Mustapha Kemal regarded this treaty as a mere “scrap of paper.”

Another demand was the Greeks who fled should have been permitted to return to their homes and the Muslims population who replaced them to leave Pontus. This raised the issue of an exchange of populations but such a condition would have been unacceptable to the Turks.

On the other hand, the great powers lacked the political will to do anything to assist the Pontian Greeks. The Greek state couldn’t assist their compatriots in Pontus as the Greek army had failed to defeat the Kemalists in October 1921.

Obviously, demands sought by the Pontians were just but the U.S and European powers were not really interested in going to war with Kemalist Turkey.

They had their own agendas in Asia Minor, as each of them competed for economic concessions from the Kemalists.

There were prospects for railway construction, oil exploration, trade and commercial opportunities.

The ten demands outlined above were never fulfilled by the United States or the European powers. The cry for justice went unheeded , as the Pontian Greeks were left to fend for themselves.