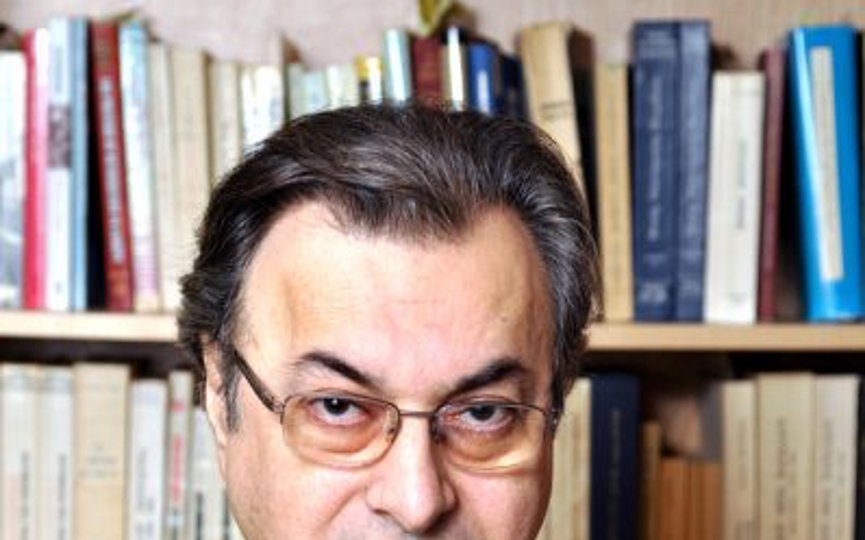 There are big-footed, heavy-handed people who stomp through life without leaving a mark because they had no real weight, and then there are those like Dr. Andre Gerolymatos, whose character creates, and leaves behind, an indelible imprint of meaning and being.

Gerolymatos, Director of the Stavros Niarchos Foundation Centre for Hellenic Studies at Simon Fraser University in Vancouver, Canada, died May 30 at 67 from brain cancer, mourned by friends, family, Hellenophiles, students, and colleagues, including at The National Herald, where he was a well-followed contributing columnist.

His career was marked by his renown in Hellenic Studies, making the program at his college perhaps the best in North America, and as he was known for his expertise in other fields, a co-director of the Terrorism, Risk, and Security Studies Professional Master’s Program and hailed as an analyst in Modern Greek history and international affairs

“Over the 23 years of his active career at our institution he raised millions of dollars in gifts and grants from governments, NGOs, and individuals who embraced his vision of a vibrant and engaged Hellenic Studies presence at the university and in the broader community,” a statement from his university read.

“Dr. Gerolymatos always gave freely of his time and was often in the community giving talks on his research to lay and academic audiences. His expertise in terrorism and international relations found him in constant demand from the local, national, and international media,” the school noted, especially after the Sept. 11, 2001 terrorist attacks in New York and the United States.

He held the Hellenic Canadian Congress of British Columbia Chair in Hellenic Studies, and served on the Canadian Advisory Council on National Security from 2010-12.

A prolific writer, he was the author of a number of books on Greek history, including 2004’s Red Acropolis, Black Terror: The Greek Civil War and the Origins of Soviet-American Rivalry, 1943-1949, which argued that the Greek Civil War was the first engagement of the United States in the Cold War.

His most recent books are The British and the Greek Resistance, 1936-1944: Spies, Saboteurs, and Partisans from Lexington Books and An International Civil War, Greece, 1943-1949 from Yale University Press.

A brilliant academic, he studied Classics at Loyola College, Concordia University, and Montreal’s McGill University, consistently one of the world’s best, where he earned his Master’s in Classics and Doctorate in History and where he researched British Intelligence and Guerilla Warfare Operations during the Second World War in Greece (1941-1944), one of the tops in his field.

Greece’s New Democracy President Kyriakos Mitsotakis expressed deep sorrow for Dr. Gerolymatos’ loss and his sincere condolences to his family and said the professor and friend of Greece and the Diaspora was a great Greek intellectual who made a lasting contribution to his heritage and family’s homeland.

In 2012, Mitsotakis was a speaker at an event organized by the Greek Consulate in Vancouver and the Stavros Niarchos Foundation Centre for Hellenic Studies at Simon Fraser University that Gerolymatos developed into a leading academic think tank.

Gerolymatos taught at Dawson College and McGill before joining the History Department at Simon Fraser University (SFU) in 1996 as the inaugural holder of the Hellenic Canadian Congress of British Columbia Chair in Hellenic Studies.

The school noted that, “From the very beginning of his appointment, Dr. Gerolymatos strove to secure more resources with which to expand the teaching and learning of Greek language, history, and culture at SFU,” making the Stavros Niarchos Foundation a critical partner and player.

With the Foundation’s support, Gerolymatos launched the world’s first online language learning platform designed specifically for the Modern Greek Language. The technology developed during this project has continued to evolve and has been used to support Arabic, French, and Italian, as well as 13 critically endangered First Nations languages in Western Canada in partnership with the First Nations Language Centre at SFU.

The trust that he built with the foundation brought a $7 million endowment and the creation of the thriving SNF Centre for Hellenic Studies at Simon Fraser University. He didn’t rest on his laurels though, as he built a lasting program.

His expertise stemmed from an active research program that he maintained throughout his career, school officials said, and he returned again and again to the trauma inflicted on Greece in the Second World War and the ensuing civil war.

One of his most recent books, An International Civil War: Greece, 1943-1949, published by Yale University Press was remarkable for the balanced, unbiased approach it took to the conflict, a rarity for the topic, making it especially successful in Greece, where it was translated and released by Dioptra Press.

Dr. Gerolymatos’ many honors and awards included HRH Queen Elizabeth II Diamond Jubilee Medal for Service to Canada and the Officer (Gold Cross) of the Order of the Phoenix in recognition for contributions to Greek culture.

The reaction from the Stavros Niarchos Foundation was equally resounding, a statement noting the “great sadness” at the news of his passing.

“Dr. Gerolymatos’ tireless efforts were instrumental in making the Center, and by extension Simon Fraser University, one of the foremost contributors to the field of Hellenic studies. His work was integral to ensuring that it would have the human capital, through a robust suite of permanently endowed faculty positions, to make it a lasting dynamo of research and pedagogy,” the foundation statement added.

He began his tenure as Director of the Center in 2011 where his research specialized in Greek military and diplomatic history, ranging in subject matter from military intelligence gathering in Classical Greece to American and Soviet involvement in the Greek Civil War.

“The Stavros Niarchos Foundation enjoyed a long partnership with Dr. Gerolymatos, and he joined us in Athens to speak at the annual SNF Conference in 2013 and in 2017 where he gave a talk entitled Beyond Wonder: The Infinite and the Lure of Cyber Space…We share our deep condolences with his family and with his colleagues,” said the foundation, a feeling known by all those he touched, which were many.