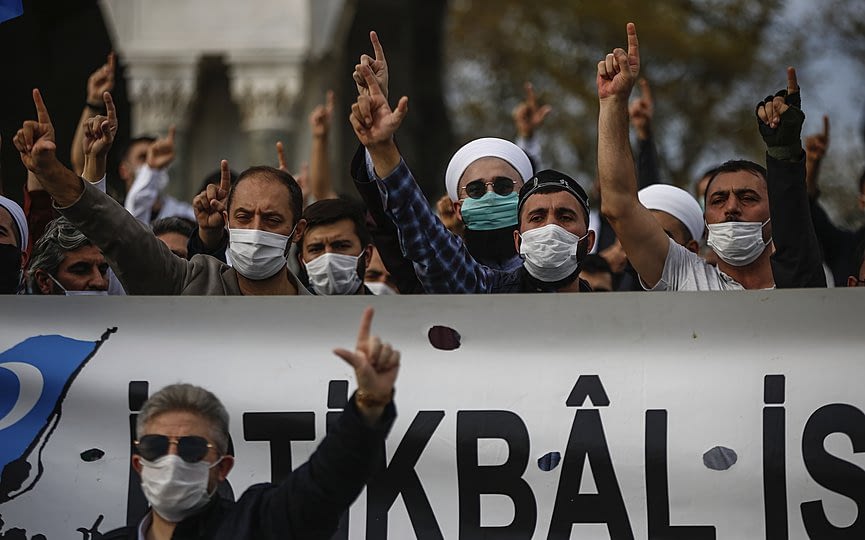 Several EU officials harshly criticized Erdogan's comments over the weekend and the bloc's executive arm, the European Commission, said on Monday that the Turkish leader should change his approach if he does not want to derail the bloc's attempts at renewed dialogue with his country.

Erdogan said Saturday that Macron needed his head examined. He made the comments during a local party congress, apparently in response to statements Macron made this month about problems created by radical Muslims in France who practice what the French leader termed "Islamist separatism." Erdogan also railed against France for condoning caricatures of the prophet of Islam.

In an unusual move, France announced Saturday it was recalling its ambassador for consultations. The French presidential office noted as well that Turkey had called for a boycott of French products. The move, if taken to heart, could add a layer of economic ramifications to the deepening diplomatic tussle.

Erdogan, who said the French leader has "lost his way," continued on the same offensive tone Monday as he called on Muslim nations to come to the assistance of Muslims in France. In a speech at a ceremony marking the anniversary of the birth of the prophet, the Turkish leader accused European leaders of conducting anti-Islam policies.

"You are fascists in the true meaning of the world. You are veritably the link in the Nazi chain," he said in reference to European leaders.

The spat comes as tensions between France and Turkey have intensified in recent months over issues that include the fighting in Syria, Libya and Nagorno-Karabakh, a region within Azerbaijan that is controlled by ethnic Armenian separatists.

In a message posted on Twitter Sunday, the EU foreign policy chief, Josep Borrell, slammed Erdogan comments as "unacceptable" and urged Turkey to "stop this dangerous spiral of confrontation."

At a summit earlier this month, EU member states agreed to review Turkey's behavior in December and threatened to impose sanctions if Erdogan's "provocations" do not stop, a council statement said.

"We clearly expect a change in action and declarations from the Turkish side," Stano said at a news conference. He said there would be many discussions "to see whether we are going to continue to wait or take action earlier."

Several EU member states leaders rallied around France in Macron's spat with Erdogan. Dutch Prime Minister Mark Rutte said his country stood with France "for the freedom of speech and against extremism and radicalism." Stressing Germany's solidarity with France in the fight against Islamic extremists, German Foreign Minister Heiko Maas described Erdogan's insults of Macron as "a new low point."

In Greece, president Katerina Sakellaropoulou said Erdogan's rhetoric "fuels religious fanaticism and intolerance in the name of a clash of civilizations, (and) cannot be tolerated."

Still, Stano insisted that Turkey remains a "very important partner" for the 27-nation bloc and that "no one will profit from more confrontation."

The increase in tensions has not helped Turkey's negotiations on joining the EU, the world's biggest trade bloc, which began in 2005 but have stood at a standstill in recent years. Turkey is the EU's fifth largest trading partner and the bloc relies on Ankara to stop migrants from entering the bloc through its borders with Greece and Bulgaria.

Suzan Fraser in Ankara, Geir Moulson in Berlin, Mike Corder in La Hague and Elena Becatoros in Athens contributed to this story.