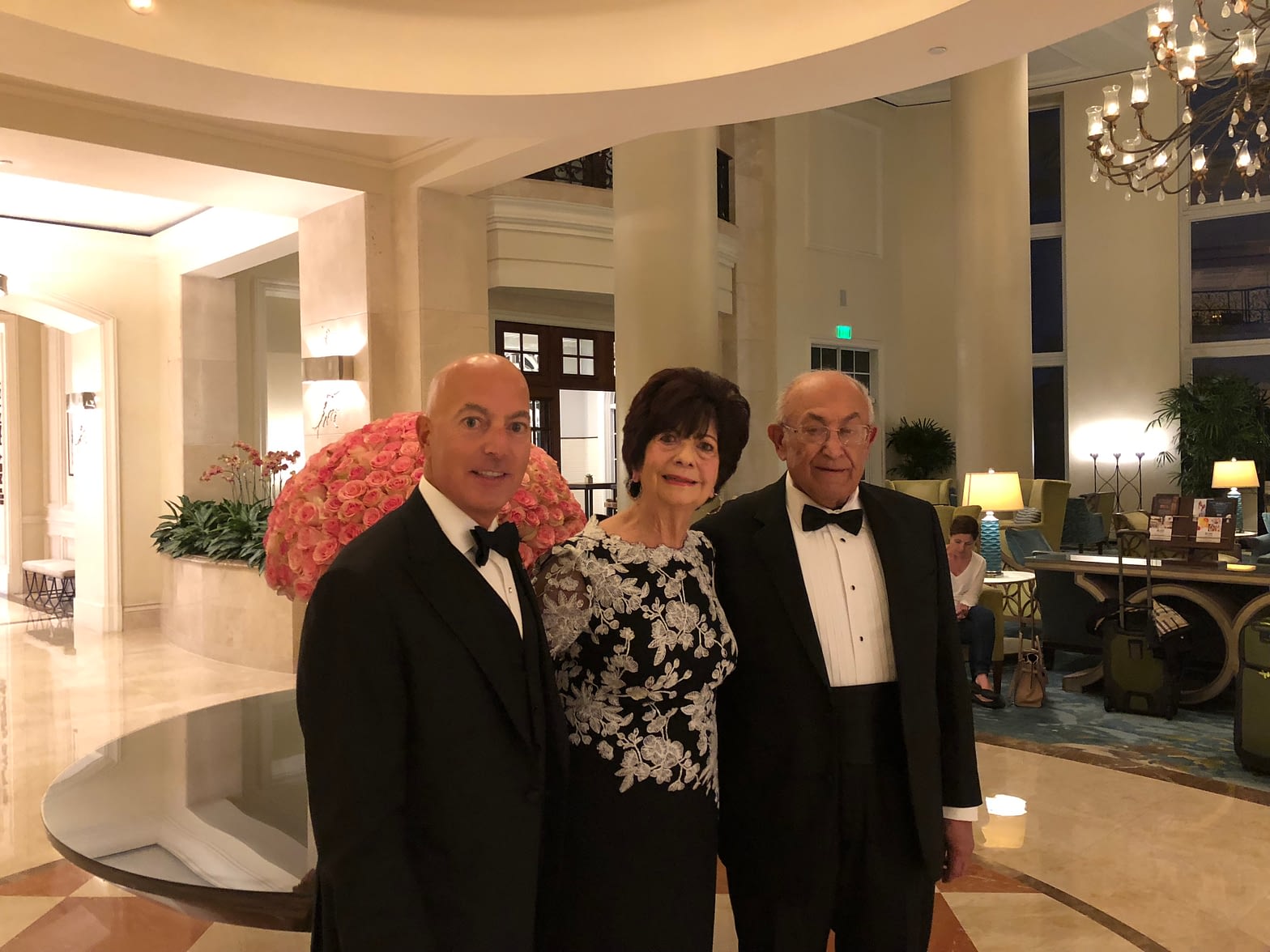 WEIRTON, WV – Michael Psaros’ parents, George and Mary-Ann, spoke with The National Herald about their son, who was recently honored by the Wall Street Alliance. They are thankful to God for their son and for their entire family.

George described how they “were sitting at the table with the president of the Georgetown University and when Mike spoke about his parents, his family, and his Church, I started to cry and I was wiping my eyes. After the speech was over, the president said ‘I saw what you were doing.’ I said ‘Mr. President it was very emotional.’”

Mary-Ann said “I felt extremely proud. Sometimes I think and say to myself this is my son I don’t believe wat he has accomplished. When I left him on the streets on New York I cried all the way home. We are from a small town form West Virginia but he took over and he made a great life here in New York, with his business, his family, and my beautiful grandchildren. He spoke about all that and I was touched and I cried.”

George praised his daughter in law, saying “I have to give credit to his wife Robin. If you think how busy Mike is with his business, very successful and all the time that he has given to the Church because he speaks everywhere and Robin is always supportive. Mike in his speech called her an angel.”

In speaking about his son’s determination from an early age, his father said: “he was always driven, I will give an example: when the steel company said they were going to close Weirton, plant the employees ended up buying the company, it became an employee-owned company, they had to raise money. Mike was in high school and he came up with an idea of the students making these gray ribbons, He went house to house selling them and each house put the ribbons on their front porches and then he took that money and gave it to the union so they could hire the attorney to help us becoming an independent company, which we did. Then, he became Key Club governor and so did his brother, and then they became international trustees in the Key Club in eight states. Then they said ‘Mike, we want you to run for international president.’ The reason he didn’t was if he would have run for international president he couldn’t go to school his senior year because of all the traveling. He said ‘Dad, it is my last year in the high school I don’t want to leave the house and travel everywhere.

“When we took Mike to Georgetown, we were sitting there and the president was speaking to the students and the parents. The president said to the parents that every parent here is used to the student bringing home A-s, but don’t expect all the students to get straight A-s because it is hard. Mike was nervous and we were hitting each other on the knee, but as we walked out he stopped and said ‘Dad, these kids might be smarter than me, but I am going to outwork them all.’ He was taking finance at Georgetown, and also studying Japanese and said ‘Dad, I want to go to Japan, would you send for a summer program?’ I said ok. He went to Japan and in three months we spoke twice because we didn’t have cellphones back then.”

He said “when Mike first got to New York he was working seven days a week and we didn’t see him for a long time. We finally went up to see him and I looked the bottom of his shoes and they had holes in them. I said ‘Mike, go buy another pair of shoes’ and he said ‘Dad, I don’t have time,’ and added that ‘the bottom of my shoes might have holes but look, on top they are always shined.’”

Psaros’ parents spoke about their son’s love for Greek Independence from a young age. “My mother would always find the longest and most intense poems for the 25th of March, “his mother said,” and Mike would get up there and charm the audience. Many were in tears. He didn’t read it from a paper in front of him – he learned them by heart.”

When Archbishop Iakovos went to Weirton, his father added, “they needed someone to give the main speech. Mike was in the seventh or eighth grade. His grandmother wrote it and Mike practiced it. When he got up to podium he was too short they put a chair, he stepped on the chair to get to the microphone and made the speech.”