WASHINGTON. Publics around the world overwhelmingly agree that the news media should be unbiased in their coverage of political issues, according to a new Pew Research Center survey of 38 countries.

Yet, when asked how their news media are doing on reporting different political issues fairly, people are far more mixed in their sentiments, with many saying their media do not deliver. And, in many countries, there are sharp political differences in views of the media – with the largest gap among Americans.

To build off Pew Research Center’s earlier findings about U.S. news media habits and attitudes, this new cross-national survey begins to study these dynamics globally. The survey finds that a median of 75% across 38 countries say it is never acceptable for a news organization to favor one political party over others when reporting the news.

Just 20% say this is sometimes okay. People in Europe show the greatest opposition to political bias in their news, including 89% in Spain and 88% in Greece who think this is unacceptable. In the United States, 78% say the news media should never favor one political party over another. In only five countries do at least three-in-ten believe it is okay to favor one side. 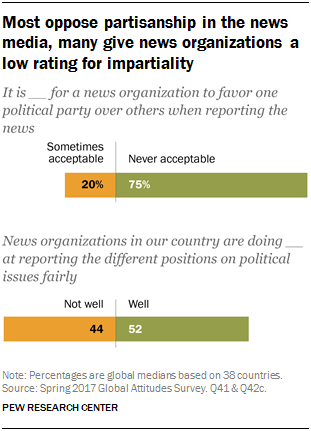 The U.S. is also one of only a few countries where governing party supporters are less satisfied with their news media than are nonsupporters. In most countries, people who support the political party currently in power are more satisfied with the performance of their news media than those who do not support the governing party.

The partisan gaps found in the survey indicate that, rather than being consistently tied to a particular ideological position, satisfaction with the news media across the globe is more closely related to support for the party in power – whether that party is left or right.

These are among the major findings of a Pew Research Center survey conducted among 41,953 respondents in 38 countries from Feb. 16 to May 8, 2017. In addition to the topics discussed above, the study also focuses on individuals’ use of the internet and social media to get news, as well as the types of news people follow.