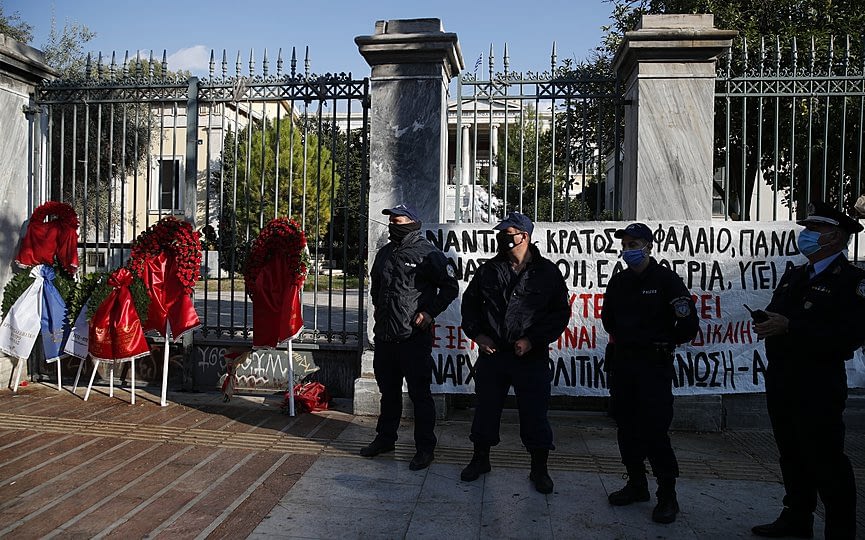 ATHENS – Political parties and people who want to keep the annual tradition of marching on Nov. 17 to mark the anniversary of a college uprising in 1973 that led to the downfall of a junta said they will take to the streets despite a ban on gatherings aimed at slowing the spread of COVID-19.

The New Democracy government imposed a second lockdown requiring people to stay at home except for permissible missions and barred public gatherings, then issued the prohibition on marching that protesters said will be defied.

The 1973 student-led protests against the ruling Colonels saw some 24 students killed, said Al Jazeera in a report on plans by rival parties to march despite fears it could be a superspreader event as the Coronavirus is overwhelming Greece.

“We did not celebrate any of the things that unite us in 2020,” said Citizens’ Protection Minister Michalis Chrisochoidis, noting that other national holidays were cancelled due to the spread of COVID-19.

“The same will be the case with the Polytechnic anniversary,” he added as he gave the orders to cancel the march, after the government earlier has passed a law restricting demonstrations on the streets that snarled traffic and locked down whole areas.

The Nov. 17 march traditionally begins at the Polytechnic University where the 1973 uprisings started, seeing a tank crash through the gates, and ends at the US Embassy to show fury at the American government backing the dictatorship.

It often sees tens of thousands march and last year featured Radical Left SYRIZA leader Alexis Tsipras, four months after being ousted by New Democracy, marching part way but breaking off before others went to the US Embassy.

Previous years have seen anarchists try to hijack the event and tangle with riot police but this year the government is moving toward a further crackdown on anti-establishment groups to meet its vow of slowing violence.

In a slap at the government, a union of judges and lawyers said prohibiting the march would be unconstitutional and calling for it to be “immediately revoked” even though it could spread the virus.

Yanis Varoufakis, the former finance chief for SYRIZA who was ousted after Tsipras for refusing to agree to impose austerity measures, will march along with his new tiny MeRA25 party despite threats of being arrested.

He said they would follow health protocols requiring the wearing of masks and staying a a safe social distance of at least 1.5 meters (4.92 feet) apart, essentially impossible in a crowd of thousands on the streets if big numbers show up.

“There is no democracy without personal and collective responsibility,” United Kingdom-based based professor Dimitra Simeonidou told the news site, disagreeing with Varoufakis’s decision. “Our first and upmost responsibility right now is to keep each other safe.”

But Antonis Faras, a leftist from the Synantisi initiative, said he'd march and blasted the government's decision even though it was not political in nature but designed to protect public health.

“This is a political decision that allows the government to hide behind the COVID-19 emergency, but this has been its politics: everything that goes wrong, the state offers the police as a solution,” he said.

In July, the government passed a law restricting the right to demonstrate by requiring demonstrators to get police approval and holding organizers liable for damages or harm, inapplicable to anarchists who hit and run during the protests.

“If you lift the right to protest while maintaining medical protocols, that is a slip towards authoritarianism,” Seraphim Seferiades, Professor of Political Science at Panteion University in Athens.

“It is setting up a legal framework to scare people,” he told the site. “They do understand the pandemic is real. But the government, rather than implementing all necessary measures to curb the spread of the virus, it bans the protest for COVID-19 related concerns. This is quite a paradox.”