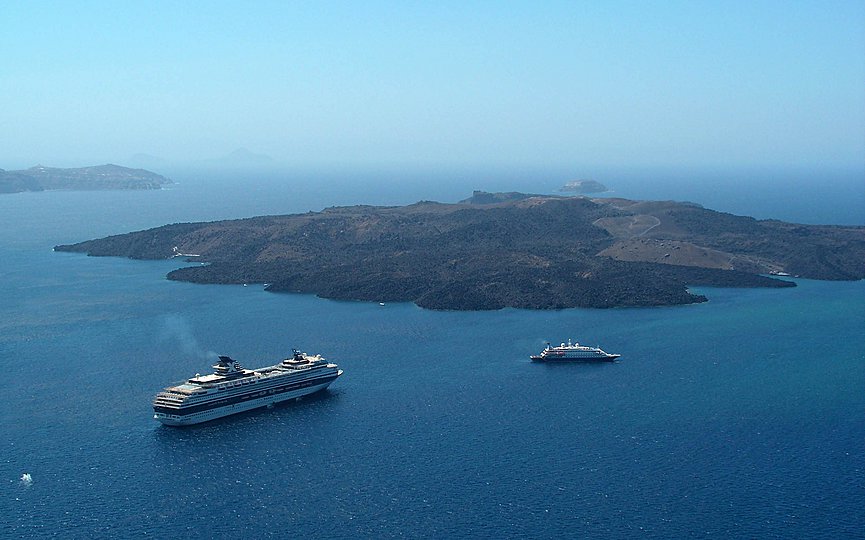 ATHENS — After American and Greek researchers early in 2021 warned that Santorini, home to a now-dormant volcano that erupted 3,666 years ago, could explode again, researchers have found more, inactive volcanoes around the island.

A seismic survey of the seabed, using sound waves, revealed the discovery buried beneath the deposits of volcanic eruptions west of the island and scientists also revealed for the first time how Santorini and its neighboring volcanos, Kolumbo and Christiana, were created and evolved over time.

The results were published a few in the scientific journal Geology. The research was led by Jonas Preine, from the Institute of Geophysics of the University of Hamburg, said Kathimerini, Participants also included University of Athens Associate Professor Evi Nomikou and Emeritus Professor Dimitris Papanikolaou, as well as researchers from the Helmholtz Center for Ocean Research Kiel and University of Clermont Auvergne.

In March this year, the US-Greek team of scientists working to create a geomorphologic map for the tourist hot spot of Santorini to “enhance hazard assessments” said it’s “at high risk for volcanically- and seismically-induced hazards.”

The scientists, whose paper on the subject was published in the Journal of Maps, applied planetary geologic mapping methods to submarine data to create an onshore-offshore geomorphologic map of the Christiana-Santorini-Kolumbo Volcanic Group, the paper said.

“Submarine geomorphologic maps are used to provide geologic context and spatial information on landforms and related geo-hazards for risk management,” their abstract said.

The long dormant submerged volcano called Caldera on the Nea Kameni islet across from the main island of Santorini is one of the main attractions and tourists can walk to the top of it.

In 2012, the site Volcano Discovery said that, “There are some (still minor) signs that the volcano of Santorini could wake up in a medium future (months to years.) Predicting IF and if yes, WHEN exactly there will be a new eruption is impossible – volcanoes are and will always be unpredictable.

“It is quite certain, though, that the volcano will erupt in the future again, because it is an active volcano and far from extinct,” the report added, the volcano erupting nine times in 2000 years, the last in 1950.

The eruption in 1645 B.C. was one of the most cataclysmic events in world history but if it happens again, Greece’s General Secretariat for Civil Protection said it has a  ready plan to deal with it.