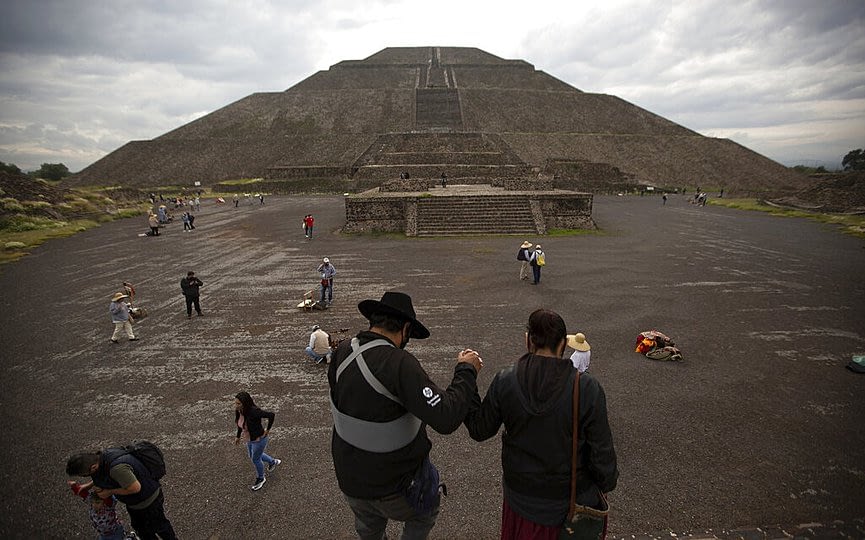 FILE- Visitors walk in front of the Pyramid of the Sun in Teotihuacan, Mexico, Thursday, Sept. 10, 2020. (AP Photo/Fernando Llano)

MEXICO CITY — Mexico's pre-Hispanic ruin sites have begun re-opening to tourists for the first time since they were closed due to the coronavirus pandemic in March.

The ancient sites hadn't seemed so lonely since they were abandoned centuries ago. The few hundred visitors who will be allowed into most sites must line up for limited tickets, get their temperatures checked, wear face masks, get a dose of hand sanitizing gel and stay 1.5 yards (meters) from each other. Admission will be limited to just 30% of the sites' capacities.

At the country's most-visited archaeological site, the pyramids of Teotihuacan just north of Mexico City, cash-strapped trinket vendors returned but there were few visitors Thursday. Visitors are limited to 3,000 per day and are not allowed to climb up the Pyramids of the Sun or Moon, which used to draw tens of thousands of visitors for the Spring and Fall equinoxes each year.

Omar Gonzalez visited Teotihuacan with his wife and three children on the first day it opened, saying they had been looking forward to the trip since last year.

"We had this trip planned since last year," González said. "We had the package and everything else, but unfortunately due to the contingency we had to postpone it until now."

Teotihuacan was perhaps the most important and influential city in the region during its apex between 100 B.C. and A.D. 750, when it had about 100,000 residents. The city was abandoned long before the rise of the Aztecs in the 14th century.

Ramon Alvarez Negrete set up his handicrafts for sale at a spot along the Causeway of the Dead, a broad stone-paved boulevard that runs between the pyramids. Alvarez Negrete said it had been a hard five months with the site closed. 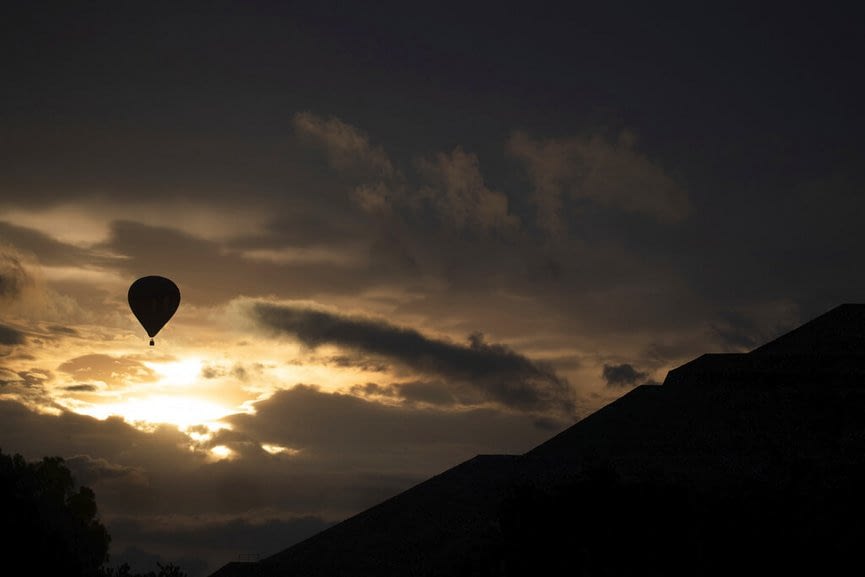 A hot air balloon flies tourists near the Pyramid of the Sun in Teotihuacan, Mexico, Thursday, Sept. 10, 2020. (AP Photo/Fernando Llano)

"Income, well, we had no income, because we are just working at home," he said. "The little that we had saved, a peso saved, we had to spend because the family needs to eat."

The staggered opening times for archaeological sites across the country have proved confusing for some visitors. There is no single day for reopening, which is in part dependent on making sure adequate preparations are in place and pandemic conditions in each part of the country.

Spanish tourist Mateo Garrosh made it to Teotihuacan Thursday after a little research.

"I looked up on internet what places are open, the most emblematic places in this zone, and I found out that they open today," he said. "But it wasn't all that easy, because each place opens a different day."

Souvenir vendors set up their wares near the Pyramid of the Moon in Teotihuacan, Mexico, Thursday, Sept. 10, 2020. (AP Photo/Fernando Llano)

Mexico is desperate to reopen its tourism industry, and archaeological sites are a key part of the country's attractions. Tourism provides 11 million jobs, directly or indirectly in Mexico, and many of those workers simply went home to wait it out after people stopped traveling during the pandemic.

Agustin Robles returned to selling carved masks and obsidian figures near the Pyramid of the Sun for the first time in months Thursday.

"It has been very tough to be honest. We received no support by the government be it state, government, municipal or federal," Robles said.