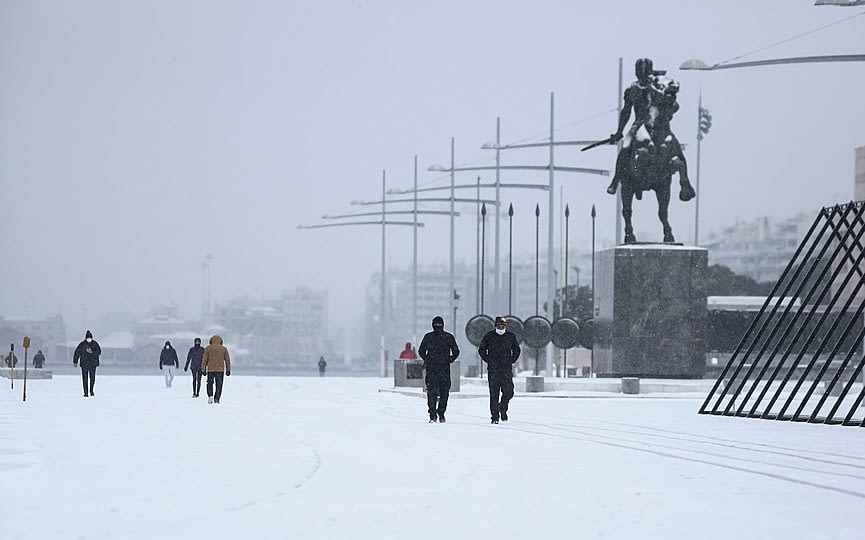 FILE- People walk past a statue of Alexander the Great, during a snowfall in the northern city of Thessaloniki, Greece, Sunday, Feb. 14, 2021. "Medea", a new weather system has started hitting the northern parts of the country with very strong winds and heavy snowfalls. (AP Photo/Giannis Papanikos)

ATHENS – The first wave of the Medea weather system was fully underway in Greece on Sunday, bringing snow to many parts of the country, with the northern suburbs of Attica expected to see snow fall from Sunday afternoon.

Another broad meeting to coordinate the response to the cold snap is to be held at the Civil Defence Operations Centre at 15:00 on Sunday, co-chaired by Citizen Protection Minister Michalis Chrisochoidis and Deputy Civil Protection and Crisis Management Minister Nikos Hardalias, while Alternate Interior Minister Stelios Petsas and Deputy Minister to the Prime Minister Theodoros Livanios will be participating. The aim is to ensure the optimum coordination of the various agencies involved in dealing with the bad weather, with a focus on Attica where the bad weather is expected to intensify later on Sunday.

According to the National Observatory of Athens weather service, meteo.gr, quite heavy snow is expected in Central and northern Greece, as well as at higher altitudes. After Sunday afternoon, the bad weather will abate in the north and be restricted to the east and south, where it will extend to lower altitudes and even the northern Athens suburbs. 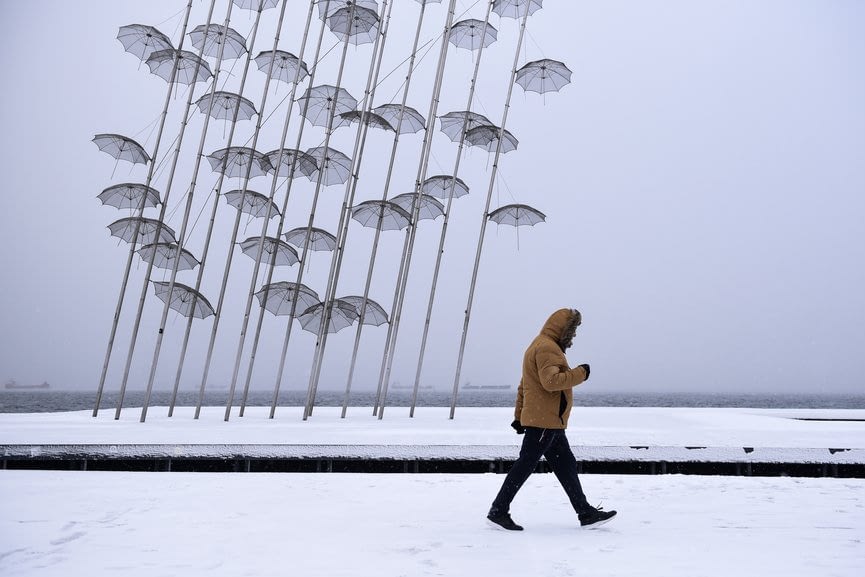 A man walks past an artwork installation during a snowfall in the northern city of Thessaloniki, Greece, Sunday, Feb. 14, 2021. “Medea”, a new weather system has started hitting the northern parts of the country with very strong winds and heavy snowfalls. (AP Photo/Giannis Papanikos)

Rain and sleet is forecast at lower altitudes, in the Peloponnese and in coastal areas, while storms are a possibility in both the Ionian and Aegean seas.

The bad weather will be accompanied by below-freezing temperatures in central and northern parts of the country on Sunday.

Snow has also closed mountain roads around the capital, including the road to Mount Parnitha and Fylis Avenue after the Kleiston Monastery.

A view of the White Tower covered with snow at the northern city of Thessaloniki, Greece, Sunday, Feb. 14, 2021. “Medea”, a new weather system has started hitting the northern parts of the country with very strong winds and heavy snowfalls. (AP Photo/Giannis Papanikos)