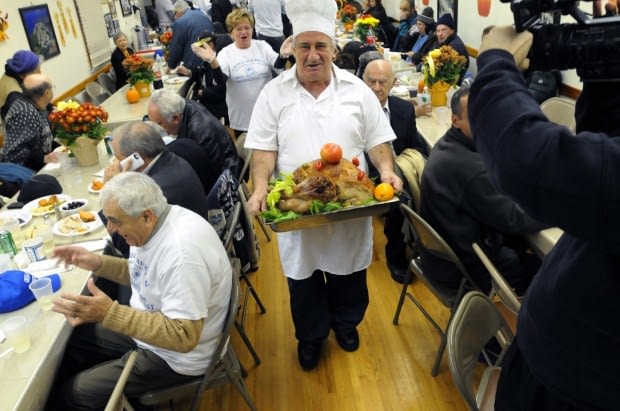 ASTORIA – Once again grateful guests and enthusiastic volunteers packed the headquarters of the Greek American Homeowners Association for its annual Thanksgiving luncheon where everyone is welcome, especially the elderly and the needy.
The speaking program was brief and included the singing of God Bless America. George Kitsios was the event’s chairman and the Association’s president, George Alexiou, served as MC. Seraphim Lazos once again sang and played his guitar.
Alexiou wished he could tell TNH the names of all the volunteers – “there are so many” – and of the people who donated one, two and up to five thousand dollars – “they want to be anonymous.” He singled out George Fakiris of Chios, however, for his support through the years “If we did not have his support we would have gone nowhere.”
The Association gave out 512 Turkey’s to needy families and cooked for more than 2000 people who passed through their doors between noon and 4 PM. “As you see everybody is happy. The most important thing is that everyone is enjoying themselves,” Alexiou said, and he was especially happy to serve the non-Greeks, who constituted more than 60 percent of the guests.
Very Rev. Nektarios Papazafiropoulos, the Dean of St. Demetrios Cathedral greeted the guests and acknowledged the volunteers from the parish PTA, but he offered special thanks to the students from the parochial school for their participation.
Astoria’s Greek-American elected representatives were present, as always, including New York State Senator Michael Gianaris, New York State Assemblywoman Aravella Simotas and City Councilman Costas Constantinides.
State Senator Jose Peralta, whose district also including parts of Astoria, offered greetings and thanked the Association for creating an opportunity for people “to stop and realize how blessed we are.”
Gianaris continued his tradition of beginning Thanksgiving with the Association. He told TNH “It wouldn’t be Thanksgiving for me without coming here first.”
Simotas told the guests, “It is such a beautiful sight to see everyone gathering together having a wonderful …I wish you all the best for Thanksgiving and the holiday season.”
When Constantinides congratulated the community he said “this is an event the community cannot do without…it is a special event every single year. Giving back, being there for your community is the epitome of Thanksgiving Day…and you are feeding not only belies, but souls today, by teaching our young people about giving back and being involved in their community and how important it is to not only think about themselves but about others.”
As the lead chef, Nikolaos Gabrielatos from Cephalonia is one of the heroes of the event. For him, “It is an unforgettable day because we celebrate with joy and humanitarianism,” he told TNH.
Amb. George Iliopoulos, the Greek Consul General congratulated the Association. He told TNH “ A community is progressive demonstrates its strength when it pays attention to its weakest and all the members of the Association have this exceptional tradition of giving to the neediest members of the community and shares in the spirit that is celebrated across America: the joy of everyone gathering around a common table. We who have been invited to watch and admire them and we are very proud.” He urged more Greek-American groups to follow their example – with different philanthropic endeavors to give back to the community and country that has enabled them to be so successful.”
Manos Koubarakis congratulated the Association and the volunteers and greeted the guests, and he also joined the volunteers who were serving the food. He said he appreciates the endeavor that give back not only to the Greek-American community but to the greater community as Americans. “Today we send a message of love, mutual support and humanitarianism…this is how member of the community present themselves as good citizens, when we put ‘we’ before ‘I’
The 25th annual event is very special for Elpida Alexiou, who is from the island of Syros, because she has been participating with her husband George Alexiou, the Association’s president, from the beginning. “I will part
Christos Andreas from Agrinion is a member of the Association and he said “It is a very good deed that they do, helping people in need every year and demonstrating their love of the community and the neighborhood.”
Anastasia Vasilakos has been coming to the luncheon since she was five. She is about to graduate from college. Her parents and grandparents, who are from Cephalonia and Sparta, have been volunteering for many years and she continues to come because, “This is a very welcoming event and I like helping people.”
Ten year-old Alexandra Orfanakos has been volunteering since her father Chris Orfanakos, whose roots are in Mani, and her mother Sonia, whose family is from Cephalonia, brought her first luncheon when she was six.
Ashley Dean does not have any Greek ties. She moved to Astoria two years ago and she usually goes home to Syracuse for Thanksgiving, when she always volunteers, but she stayed in New York City this year. Dean learned about the event from Constantinides’ twitter message. “This is the only event in Astoria that gives back to the community on Thanksgiving,” and she was happy to be a part of it.