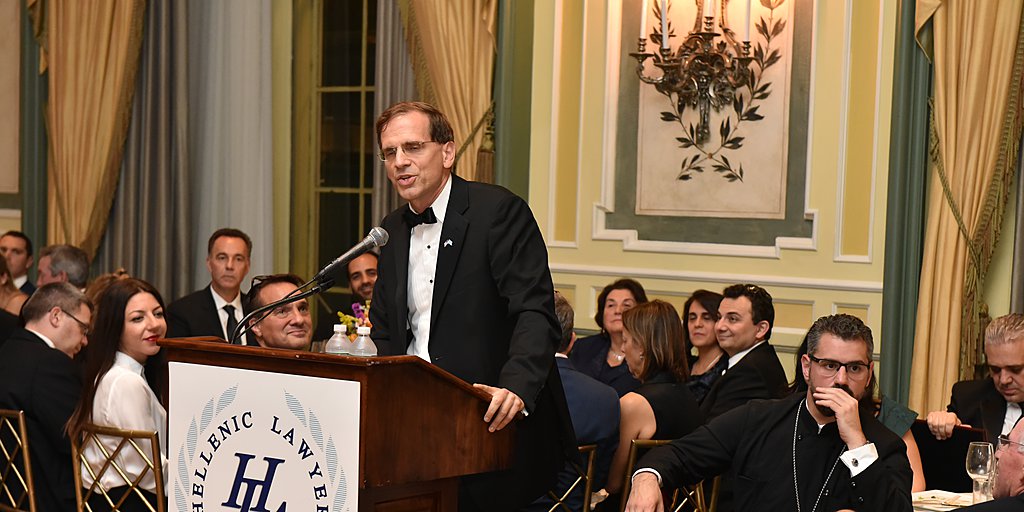 NEW YORK – The Hellenic Lawyers Association (HLA) held its 30th Annual Gala on November 2 at the Pierre Hotel in Manhattan. The Honorable Gregory G. Katsas, United States Circuit Judge of the United States Court of Appeals for the District of Columbia Circuit, was awarded the Distinguished Legal Service Award. Scholarships to deserving students were also presented at the gala.

Fr. Theofanis Papantonis gave the invocation for the event and Peter Metis, the outgoing HLA President, gave the welcoming remarks. He spoke movingly about the late Judge Nicholas Tsoucalas who passed away earlier this year, and was a founding member of the HLA. Metis also presented the award to Judge Katsas who recalled his father being honored 18 years ago with a lifetime achievement award from the New England Hellenic Medical Society in Boston.

Katsas noted that he is thrilled to be following in his father’s footsteps being recognized by his peers in the Greek-American community in his chosen profession. His father grew up in Greece with parents from “Athens and Sparta, the equivalent of a mixed marriage, kind of like Boston and New York,” and became a doctor by the end of World War II, in time to serve during the Civil War in a “MASH unit” in the mountains of Northern Greece before immigrating to the United States. Katsas’ roots on his mother’s side are from Asia Minor.

Judge Katsas was appointed to the D.C. Circuit in December 2017. He graduated from Princeton University and Harvard Law School, where he was an executive editor on the Harvard Law Review. Between 1989 and 1992, he served as a law clerk to Judge Edward Becker on the Third Circuit, to then-Judge Clarence Thomas on the D.C. Circuit, and to Justice Thomas on the Supreme Court. Between 1992 and 2001, he was an associate and then partner in the Washington office of Jones Day, where he specialized in appellate and complex civil litigation. Between 2001 and 2009, he served in many senior positions in the Department of Justice, including as Assistant Attorney General for the Civil Division and as Acting Associate Attorney General. In 2009, he returned to Jones Day. From January to December 2017, he served as Deputy Assistant to the President and Deputy Counsel to the President.

Before joining the bench, Judge Katsas argued more than 75 appeals, including three cases in the Supreme Court, 13 cases in the D.C. Circuit, and cases in every other federal court of appeals. By appointment of the Chief Justice, he served on the Advisory Committee on Appellate Rules from 2013 to 2017. In 2016, he was elected to membership in the American Academy of Appellate Lawyers.

The Honorable Nicholas G. Garaufis swore in the newly elected HLA President, Chrysanthy Zapantis-Melis, and the officers and board. Zapantis-Melis thanked all those in attendance, especially her parents Nicholas and Maria, and her brother and fellow board member George Zapantis, her husband Demetri Melis and their sons Marco and Nikolaki, for all their support. She also acknowledged with gratitude the benefactors and supporters of the organization and the event. Special thanks went out to Elena Ioannidis for all her efforts.

The festive evening continued with music and dancing well into the night.

The newly elected officers and board of the Hellenic Lawyers Association was sworn in by the Honorable Judge Nicholas G. Garaufis, at the podium. Photo: TNH/Kostas Bej