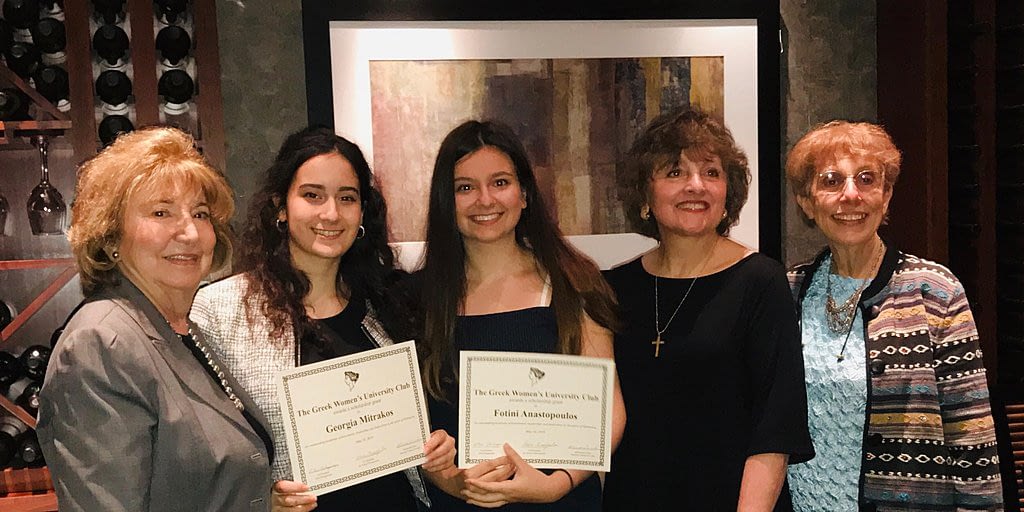 CHICAGO – It was 1931, amidst the Great Depression, when Irene Harvalis Glyptis had an idea to launch a club exclusively for college-educated Greek-American women, a rather bold move countering the fact that back then, women were not allowed to join Greek organizations such as the Hellenic Professional Society of illinois (HPSI).

And while HPSI today is open to all, the Greek Women’s University Club (GWUC) is still dedicated to supporting young women of Hellenic descent pursuing higher education. Celebrating 85 years since their official recognition as a non-profit, the ladies at GWUC awarded four female students at their annual scholarship lunch, May 18th, with emotional speeches honoring both the students and loved ones who served as role models both to their families and in Greek-American society.

Commemorating their late mothers Helen Faklis and Demetra Bursinos Kamaris, as an example of friendship and the strength independent women are capable of, Georgia Bursinos Nikolopoulos and Ruth Faklis donated of four scholarships to the GWUC this year.

“A link in this chain of sisterhood was [Helen and Demetra’s] strong belief in education and working hard,” Nikolopoulos said. “These were strong ladies who found commonality in their circumstances. Widowed, daughters close in age, and a common goal to make sure their daughters had the education needed to be independent, financially secure, and fulfilled…I know they would smile on these four young women today,” she said.

GWUC Vice President Harriette Condes-Zervakis recounted her mother Helen Condes’ story as a young woman who cherished education and, despite having moved to the U.S. when married, never forgot her roots.

“Although things did not go her way in Greece, Helen carried a little bit of Greece and her Greek heritage in her heart wherever she was. I saw that in the applications of our scholarship recipients, and for that reason I think Helen would have been very proud of you,” she told the students, holding back tears. “We are all proud of you, and though our scholarships are not really large, they are an expression of our support and pride in you,” she said.

“[Dr. Kioutas] was a true doctor in the sense of the word. When he realized that many people who had Greek as their first language were forgetting the English they acquired coming here and were treated like insane people at nursing homes and other places, he decided that the Greek community needed a nursing home,” Kioutas said. “He was very active in Greek-American organizations…he was a true Greek-American and I am sure that the community of Chicago has a lot to be thankful for,” she said.

Aside from having awarded over $100,000 in scholarships over the years, the GWUC has since 1989 also awarded Greek-Americans with over $75,000 through their annual music competition, further supporting their mission.

Speaking to the scholars and guests present, Dr. Thomopoulos shared an essay she had written about her late husband before he passed away.

“[Dr. Thomopoulos] did a lot and accomplished a lot, but more importantly, he was a very wonderful husband, father and grandfather. He loved young people and would have been very pleased to have met the four women receiving scholarships today,” Thomopoulos said. “Any young person he met, he would always make them feel so wonderful and he would always say to them ‘I know you’re going to be a terrific success!’ He would be very proud to be part of awarding this scholarship.”

Awarded $1,000 each on the basis of their academic achievements and dedication to preserving their heritage, this year’s GWUC scholars were:

Fotini Anastopoulos, a junior at Harvard University majoring in psychology with a minor in classics.

Sofia Kroll, a sophomore at DePaul University majoring in finance with a minor in community service.

Anastasia Metropoulos, a junior at the University of Illinois Urbana-Champaign majoring in biochemistry with a minor in chemistry.

The Greek Women’s University Club was established to promote education among girls and women of Hellenic descent, maintain a benefit scholarship fund, and encourage the arts, literature and sciences among Greek people.