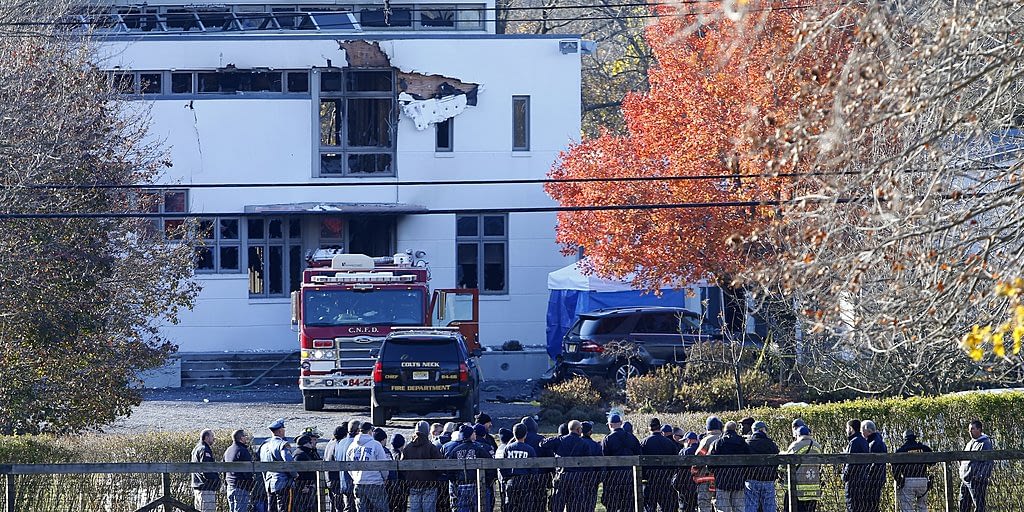 NEW YORK – 51-year-old Ocean Township Paul Caneiro was charged Thursday morning in the slaying of his younger brother, sister-in-law and his niece and nephew, all of whom were found dead after a fire at their Colts Neck home last week, the nj.com reports.

Paul Caneiro is charged with four counts of murder in the killing of his brother, Keith Caneiro, 50, Greek American Jennifer Karidis Caneiro, 45, and the couple’s two children, according to online court records. Their bodies were discovered Nov. 20 after authorities responded to a fire at their massive Colts Neck estate, the New York Post says.

When a landscaper alerted Boris Volshteyn to smoke pouring out of a nearby mansion, the plastic surgeon hurried home and found his friend and neighbor lying face down out front. His first thought was to try CPR, but it was no use.

Keith Caneiro, a 50-year-old technology executive, had been shot in the head.

Hopes that Caneiro’s wife and two young children weren’t inside as the inferno raged from early afternoon the Tuesday before Thanksgiving until at least midnight were dashed when they failed to turn up elsewhere. Friends who had gathered outside called the children’s school and Jennifer Caneiro’s cellphone.

“When the kids were not in school, and Jennifer was not answering, it all became a grim picture,” Volshteyn told The Associated Press on Tuesday. “To the very last minute, all the neighbors were hoping that the kids were spared.”

As they puzzled over the bizarre crime in pastoral Colts Neck, a wealthy enclave for horse breeders, hedge fund managers and celebrities near the northern New Jersey coast, Caneiro’s business partner and brother, Paul, was charged with setting his own family home on fire earlier the same day.

But no one has been charged yet in the Colts Neck slayings, Paul Caneiro was seen elsewhere during the fire there, and authorities have not said how the other family members died.

“We have a lot of jittery people that have questions that we don’t have answers to,” said Mayor J.P. Bartolomeo, who nonetheless said that he believes the crime was an isolated one and that the community is safe.

Paul Caneiro, 51, who remains in custody, had a detention hearing moved from Wednesday to Friday so his lawyer can review new evidence from prosecutors. His wife and young adult daughters may testify, to say he saved them from the 5 a.m. fire by awakening them, lawyer Robert A. Honecker Jr. said.

“His family is supportive of him and wants to see him come home,” said Honecker, a former prosecutor in Monmouth County. “He’s been living in that house for over 20 years. He’s got two businesses that need to be run. And he’s got no prior record.”

Police say Paul Caneiro used gasoline to fuel the fire at his two-story Colonial in Ocean Township, about 10 miles from his brother’s jarringly modern, all-white $1.5 million home in Colts Neck, which sits next to a small organic farm with sheep dotting the pasture.

Paul Caneiro was seen outside his own burning home with his family throughout that morning, visibly upset. Honecker said he went from there to the police station for an interview around noon and was there when he learned his brother’s family had been killed.

“He’s never been charged with anything in Colts Neck,” Honecker said. “He is obviously still devastated by the news of his brother and his family’s deaths.”

Paul and Keith Caneiro were the principals in two businesses, a computer systems company called Square One and a pest control business, both housed above a trendy cafe in Asbury Park. Workers in the area frequently saw Paul Caneiro there. Keith Caneiro often worked from home, Volshteyn said.

Keith Caneiro, the middle of three brothers, appeared to be the picture of a self-made man. He took classes at Brooklyn College after high school and worked for free at a computer store to learn the ropes, according to a 2001 article on Square One in the Asbury Park Press, in which Carneiro identified himself as Keith Martin.

The company, then known as Jay-Martin Consulting after the brothers’ middle names, had 26 employees at the time and installed computer systems for Citibank and interactive kiosks at the Statute of Liberty. Paul was his brother’s first hire.

The company, and the brothers, moved from Brooklyn to the quieter New Jersey suburbs as the brothers married and had children. Obituaries describe Keith’s children as 11-year-old Jesse, who liked World War I and II history, video games and sports, and 8-year-old Sophia, who loved ice skating, ninja classes and making cookies with her nanny. Funeral services for the family are planned Sunday.

In recent years, Keith Caneiro had earned a bachelor’s from Columbia University’s general studies program and, just this year, a master’s degree from its School of Professional Studies.

Jennifer Caneiro, 45, was active at her children’s school. She also enjoyed exercising, going to the beach and trips to a family home in Greece, her obituary said. She and Keith also took frequent trips to Atlantic City, Volshteyn said.

Family members, including a third brother, have declined to speak to The Associated Press this month. Prosecutors said at an early news conference that the Colts Neck slayings were “targeted.” They plan a news conference Thursday on the mansion fire.

Celebrities with ties to Colts Neck include Bruce Springsteen, who owns an estate there; former “Daily Show” host Jon Stewart and his wife, who operate an animal sanctuary; and Queen Latifah, who sold her mansion in 2015.

Christine Conroy, a longtime local who was out with her sister Tuesday at nearby Stonehenge Stables, said some of the new homes in town sit empty because “people mysteriously go bust.”

“There’s a bit of a culture clash,” she said, between old and new residents.

Volshteyn described his neighbors as largely private people. Although they were friendly, and their daughters played together, he never knew Keith had a brother.

The Caneiro home now sits boarded up, with a chain-link fence around it and police tape on the ground.

“It’s a little bit hard to come home and drive past the house. It’s a reminder of what happened,” Volshteyn said. “And for a lot of the kids, too, it’s hard to understand.”

(Material from Associated Press was used in this report)