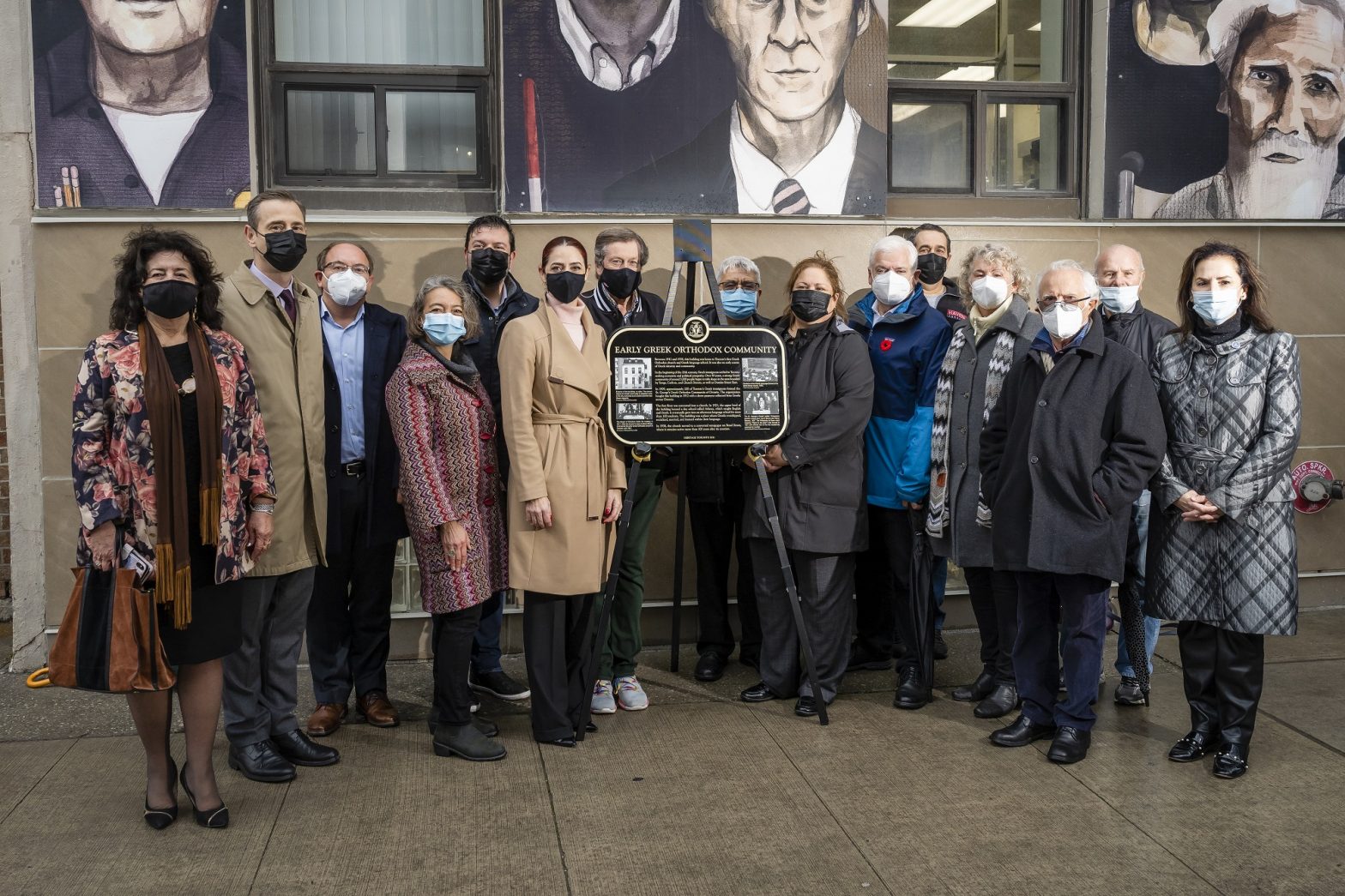 The Hellenic Heritage Foundation in collaboration with Heritage Toronto honored the site of the first Greek community center in Ontario with the unveiling of a plaque at 170 Jarvis Street. (Photo: Photagonist.ca)

TORONTO – The Hellenic Heritage Foundation (HHF) in collaboration with Heritage Toronto honored the site of the first Greek community center in Ontario, the birthplace of one of Toronto’s strongest ethnic communities, with the unveiling of a plaque at 170 Jarvis Street.

“We at the Hellenic Heritage Foundation and the Greek Community of Toronto felt it was important to honor this part of our heritage,” said Sandra Gionas, HHF Board Member, “and so we applied to have a historical plaque erected at 170 Jarvis Street through Heritage Toronto.”

The plaque was unveiled on October 30 with Mayor John Tory and leaders of the Greek community in attendance to help mark this historic event. Speakers shared the story of how the Greeks built their community into the larger mosaic that is Toronto at the event commemorating this important part of Greek-Canadian history.

The event was part of the HHF’s commemoration of the 200th anniversary of the Hellenic Republic and held under the auspices of Greece 2021.

HHF is a not-for-profit organization dedicated to promoting Hellenism throughout Canada through educational, cultural and heritage initiatives.

In honor of the unveiling, Chris Grafos, Co-Founder and Co-Director of the HHF Greek Canadian Archives at York University, shared the following article, titled 170 Jarvis, A History:

170 Jarvis Street acted as the first Greek Orthodox Church and Greek language day school in Toronto. While the site is of ostensible significance to the Greek community in Toronto, it is also emblematic of the city’s social and cultural landscape in the early 1900s. Like many other ethnic groups, early Greek immigrants negotiated their belongingness and relationship with mainstream Toronto in unique ways.

While inserting themselves into Toronto’s commercial landscape, many Greeks in Toronto organized themselves into an official community. The purpose was to construct an organization that offered a sense of familiarity and tradition. The building at 170 Jarvis Street signifies two spaces where Toronto’s Greeks resisted integration; religion and language. The allure of Toronto as a place for economic betterment compelled many Greeks to settle in the city, but as many married and had children, connections to a known rootedness grew in importance.

The site’s history is well over a century old. In 1909, approximately two hundred Greek immigrants in Toronto met at a Y.M.C.A. to officially form the St. George Greek Orthodox Community of Ontario. In 1912, the organization bought Kay’s House, here at 170 Jarvis Street. The down payment was collected from Greeks all across Ontario by a sub-committee consisting of George Letros, Bill Karry, and Constantine Kanas. In 1917, $14,000 was collected from donations and the mortgage was paid in full. Prior to the building’s transformation into a church, the Greek Orthodox community in Toronto’s religious services were performed by itinerant priests. The first priest assigned to the community was Reverend Amvrossios Parashakes, who left the parish in 1912 to fight for Greece during the Balkan War.

In 1921, the upper level of the building was turned into a day school called Athena, which taught both English and Greek. Eventually, the program was turned into an afternoon Greek language school where approximately one hundred students attended.

The site was also home to the St. George’s Ladies’ Auxillary. The organization was formed in 1921 following a visit to Toronto by the Bishop of Boston, Rt. Rev. Joachim Alexopoulos. Its purpose was community charity, primarily caring for the sick and needy. The first president of the organization was Maria Harakas. Despite an all-male clergy, the ladies auxiliary unit was organized and run by Greek women and offered one of the few spaces where women could take on public leadership positions.

The church also represents the propensity of early Greek immigrants to remain endogamous. In Toronto, where many Greeks resided, 170 Jarvis allowed for Greeks to marry other Greeks. This is not necessarily true in the rest of Canada where census figures do not support a monolithic construction of Greek identity or community. In 1921, 29.3 percent of the Greek born population had become naturalized British subjects (Canadians). This number grew to 62.7 percent in 1931. Of the 9,444 Greeks in Canada in 1931, 69.4 percent were Greek Orthodox, 10.9 percent were Anglican, 7.2 percent were Roman Catholics, 3.1 percent were followers of the United Church, and 13.9 percent professed to be adherents of other denominations. In Toronto, this site was a bastion of Greek Orthodox identity.

In short, 170 Jarvis Street is an important piece of Toronto and Canadian history. It is not strictly a Greek-Canadian tale, it is an immigrant narrative during one of the earliest expansions of this city’s diversity.