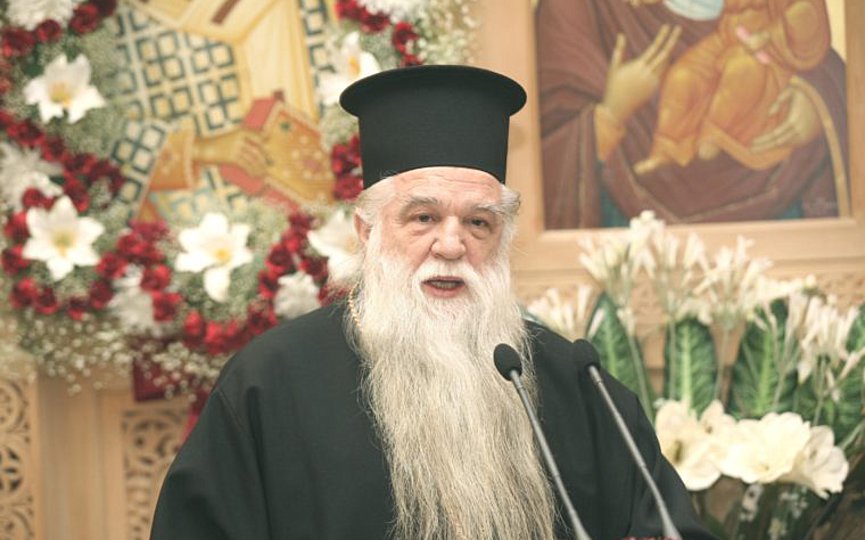 A raging Greek cleric who had lashed out at gays, refugees and politicians now said that the deadly fires that killed at least 74 people, with dozens missing, was a consequence of Prime Minister and Radical Left SYRIZA leader Alexis Tsipras not believing in God.

That drew quick condemnation on social media, including from other Greek Orthodox clerics with the head of the Church, Archbishop Ieronymos, who has done essentially nothing to rein in the provocative Bishop, putting out a statement that said Amvrosios was “only expressing his personal opinion.”

Citizens Protection Minister Nikos Toskas said the fires were set and Defense Minister Panos Kammenos had military patrols join the fire brigade and others to be on the look out for more arsonists as burning wooded land in the summer is a frequent occurrence in Greece so it can be built on later.

In March, a court acquitted Amvrosios on a charge of inciting hatred against gay people, clearing him of violating the anti-discrimination law, but drawing the fury of rights groups and political parties in Greece.

The case referred to an online post by Amvrosios in 2015, while Parliament debated the legal status of same-sex unions.

“Do not go near them! Do not listen to them! Do not trust them! They are the damned members of society!” he said in a rant which also described homosexuals as “monstrosities of nature.”

“They are psychologically and spiritually unwell! They are people with a mental disturbance,” he said, with no one in the Church questioning if he was disturbed.

In 2016, he verbally attacked then-Education Minister Nikos Filis, who wanted religions other than Greek Orthodoxy to be taught in schools and for religion to be taught in a secular fashion.

After the Church went after him for calling for separation of Church and State – which Tsipras said now wants to do as well – Filis was ousted, drawing more fire after he said religious courses
Amvrosios described the SYRIZA minister as “ruthless, arrogant, complex-ridden, destructive and… cursed.”

“(Filis) is subversive! He is irreligious! He has no national identity. The only thing he is interested in is promoting his leftist, atheist culture,” said Amvrosios who also attacked a ministry proposal to scrap the teaching of Ancient Greek in high school as part of a wide-reaching overhaul of the country’s secondary education system.