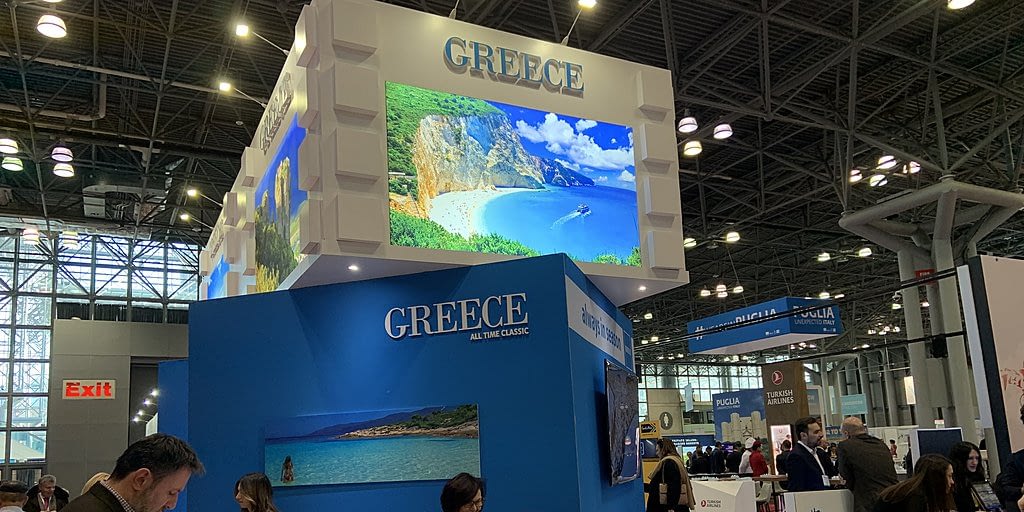 Greece participated this year with the Ministry of Tourism’s Greek National Tourism Organization (GNTO) booth as well as with the regions of Crete, South Aegean, Central Macedonia, and Central Greece represented. Greek travel agencies also had booths at the event. Among those in attendance was the GNTO Deputy Secretary General Barbara Avdi.

The Consul General of Greece in New York Konstantinos Koutras referred to the increasing number of people at the consulate interested in obtaining a visa for Greece.

“In this great exhibition being held in New York, the metropolis of the world with the target audience having such a great purchasing power, the presence of our homeland is important. Greece as a tourist destination all year round I think has achieved a little miracle. We are trying to expand this miracle, and I, as Consul General, must assure you that the increase in the number of people coming to the Consulate to obtain a visa to visit Greece has doubled. And I’m not referring to American citizens, but to third-country nationals living in New York who come with adoration and love to visit the Greek islands, the Greek homeland.”

The flow of tourism from United States to Greece is expected to increase this year as well, according to Koutras.

The Regional Adviser, Alexandros Markogiannakis representing Crete at their booth, told The National Herald, “this year we are participating in the exhibition as the region of Crete. The main pillar of the island’s economy is tourism and we represent Crete so that we can give it the brand it deserves, an international, global brand. It is an internationally recognized exhibition and Crete could not be missed. America’s market is an ever-evolving market and is constantly changing. There is a great deal of room for us, of course, and we are here. I think gradually we can reach the level that such a large market as America requires.”

The exhibition was also attended by Thessaloniki Deputy Regional Governor Voula Patoulidou, who said, “I think Greece should have participated in the New York show for years because Greece in America has a much more dynamic, much more organized presence. The Greek community has also moved to another level of professional lobbying for lawyers, doctors, and scientists in general, which means that we do not cut our roots, so we bet on the presence of Greece in this exhibition so that the roots are not lost and for all of Greece to be more attractive to visitors, and not just Mykonos and Santorini.”