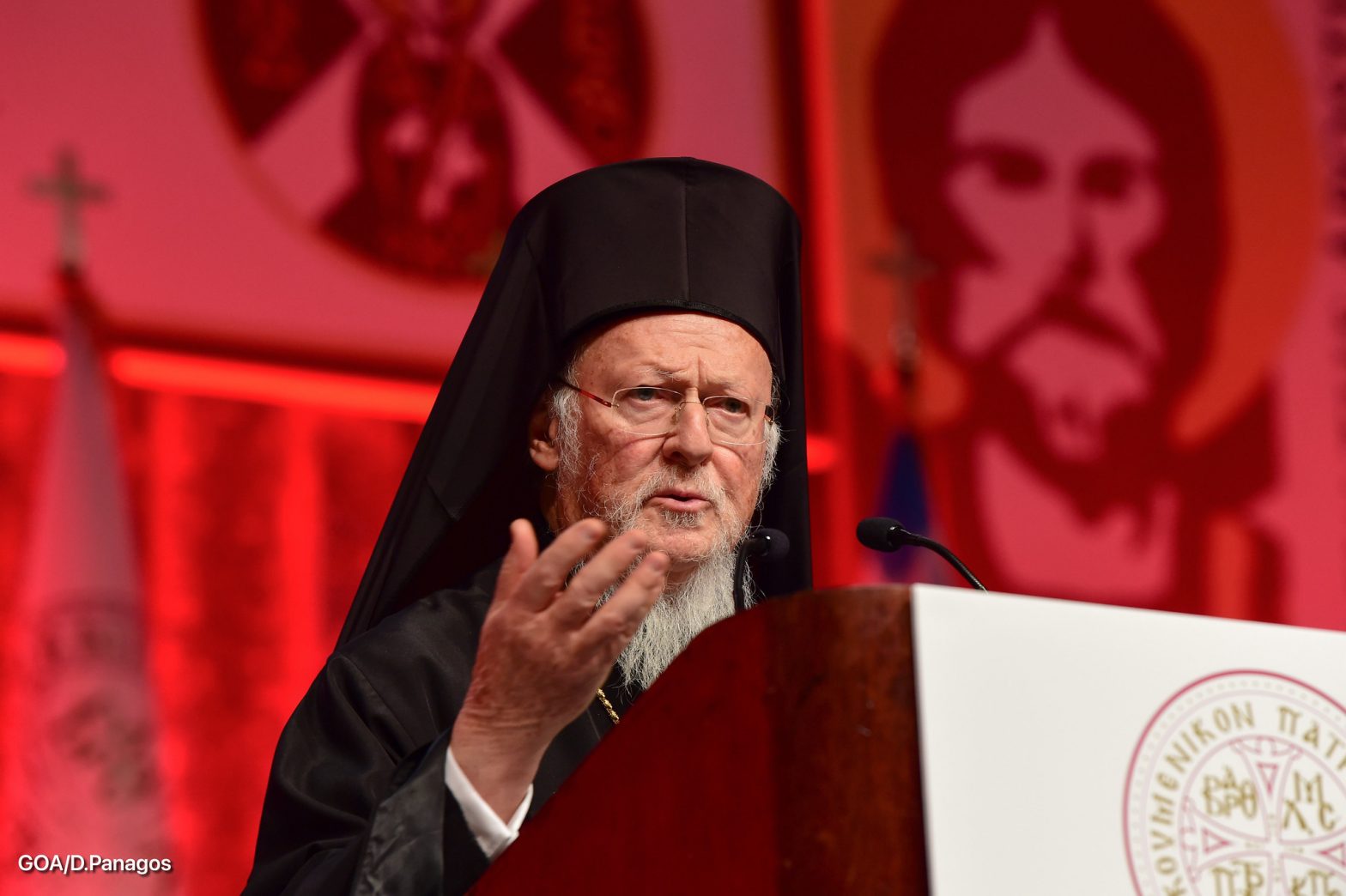 BOSTON – His All-Holiness Ecumenical Patriarch Bartholomew departed for his headquarters at the Phanar of Constantinople on Sunday afternoon, November 7, with a direct Turkish Airlines flight. He arrived in Constantinople early on Monday morning November 8.

Dr. George Syros, who was in the medical team that performed the procedure on the Patriarch under the leadership of Dr. George Dangas, traveled with His all Holiness in an abundance of caution. Dr. Dangas told The National Herald (“TNH”) that the decision to accompany the Ecumenical Patriarch on his trip to Constantinople was made so that “His All-Holiness himself would feel the security of the presence of a medical specialist, given that he [was to] travel a mere twenty-four hours after the operation.” Third Deacon Kallinikos and his aide, Panagiotis Grafiadellis, were also on the flight with the Patriarch.

His All Holiness was discharged from Mount Sinai Hospital on Friday morning November 5, after a successful stent placement procedure, which he underwent on Wednesday, November 3.
When the Patriarch left the hospital, he thanked the Greek-American Community for the interest it showed in his health status, and stated that, “I am happy to be out of the hospital safe and sound thanks to the care of brother Archbishop Elpidophoros of America and the doctors. I was very happy to find many Greek doctors and not by chance but because they are prominent doctors of whom we are proud. It was a small adventure of my health; I overcame it with God’s help in the best possible way and it was God’s blessing that I was here these days when my problem was identified and we solved it and treated it with good doctors.”

He added: “I am leaving for Constantinople on Sunday at noon to take up my duties, which I left temporarily. Thank you for the interest of all, everyone, especially Archbishop Elpidophoros, but also of the Media which, from what I attended, showed special and loving interest in the case of my health. I thank them and bless them all, on behalf of the Mother Church. May you all be well and again, without illnesses.”

Prior to his departure His All Holiness made the following farewell remarks:
“Your Eminence Archbishop Elpidophoros of America,
Your Eminences and Your Graces, beloved brothers in Christ,
Most Honorable Presbyters and clergy,
Beloved and blessed children in the Lord,

At this special hour, when we depart the United States of America, we convey to you our paternal and Patriarchal satisfaction for this Visit to a truly great country. We were able to see aspects that had been heretofore hidden, and meet new faces and new friends, as well as reacquaint ourselves with many dear and old friends.

We bid farewell to all with a heart filled with emotion and hope for the future. We first came to the United States as Patriarch in 1997 for the 75th anniversary of the Greek Orthodox Archdiocese of America. And we leave now on the cusp of the 100th anniversary. We have only gratitude to Almighty God for His grace and mercy to grant us such a panorama and view of the life of this precious Eparchy of the Ecumenical Throne.

We express our gratitude to our beloved brother in Christ, His Eminence Archbishop Elpidophoros of America, to their Eminences the Metropolitans of the Holy Eparchial Synod, as well as to their Graces the auxiliary Bishops. We also thank the reverend clergy and laity and all the faithful, whom we have visited.

We have had the opportunity to meet with so many faithful, and with ecumenical leaders. Our heart has been open to all and full of love and respect for all. We salute this land of liberty, where every human person is respected, no matter their beliefs. We fervently pray that the people of the United States will always enjoy spiritual prosperity, principles of peace, love and brotherhood, and the triumph of truth.

Most of all, we cherish the time passed with our own Orthodox faithful, the Bishops, priests, laypeople, and especially the children, that have made this visit so enjoyable and so memorable. We have prayed together and strengthened the bonds of love that secure the unity of the Church. We have feasted together and shared the fellowship of the Holy Spirit. When we think of the faces of the children, the most precious treasure of the American Orthodox communities, we are filled with hope for the future.

The Holy Archdiocese of America is a newly planted branch of the ancient vine of Christ’s First-Called Disciple, Saint Andrew.

Your roots reach down deep into the history and tradition of the Mother Church. Hold fast these traditions and stand fast in the Orthodox Faith.

And so, as we bid you farewell, we leave you with a heart filled by your love, and we commend all of you to the love of God. May His love, peace and hope fill your hearts unto overflowing. At this point, we find it “meet and right” to express our sincere gratitude to the doctors and medical personnel of Mount Sinai Hospital for their great care and effective treatment that offered to our Modesty during the last part of our trip. We were greatly impressed by the combination of their professionalism and scientific expertise with the qualities of kindness, compassion and empathy. We would be remiss if we failed to also thank His Eminence Archbishop Elpidophoros for his ceaseless interest for our physical well-being, as well as for providing us throughout our Apostolic visit with the precious assistance of Dr. John Thomas. We are also very moved by the messages and expressions of solidarity and love that we have received by many of you, as well as by your fervent prayers. We bestow on all of you our paternal and Patriarchal blessing, invoking upon you the grace of God, the great “physician of our souls and bodies.”
“Δόξα τω Θεώ πάντων ένεκεν!”
“Glory be to God for all things!”