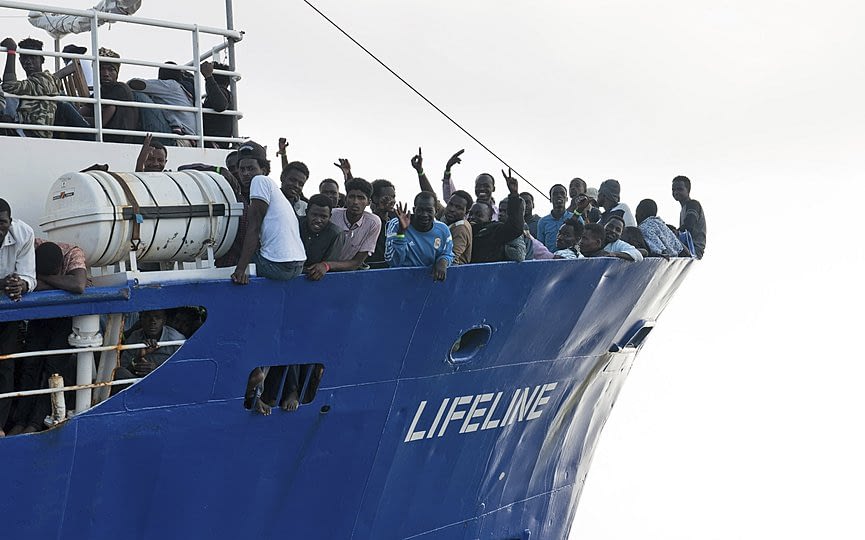 BRUSSELS (AP) — Several European Union leaders on Sunday backed plans to screen migrants in North Africa and the Balkans to see whether they are eligible for asylum, as tensions over how best to handle the arrivals of thousands of people threatens to undermine the bloc’s unity.

At emergency migration talks in Brussels, a group of 16 countries led by France and Germany were thrashing out who should take responsibility for migrants arriving in Europe — currently mostly Italy, Greece and Spain — how long they should take care of them and how much their European partners should do to help out.

Failure to agree on how to deal with the challenge of migration threatens the EU’s border-free travel area, one of the biggest accomplishments in the bloc’s 60-year history.

The number of people arriving in Europe has dropped significantly this year — the U.N.’s refugee agency forecasts around 80,000 people will enter by sea in 2018 if current trends continue — but the EU’s political turmoil over the topic has soared. Anti-migrant parties — and governments in Hungary and Italy — have been fomenting public fears of foreigners and have won support doing so.

Encouraged by a deal with Turkey that has slashed migrant arrivals from there by 97 percent since 2015 — when hundreds of thousands of people entered, mostly migrants fleeing war in Syria and Iraq — the 28-nation EU is ready to greenlight plans to set up screening centers in Algeria, Egypt, Libya, Morocco, Niger and Tunisia.

Plans to set up migrant reception centers in Albania are also under discussion.

French President Emmanuel Macron said “the method that we are going to adopt” would involve “working together vis a vis the countries of transit and origin outside the European Union.” He mentioned Libya — the main jumping off point for countries bound for Europe — other African countries and the Balkans.

Noting that migrant arrivals have dropped significantly, Macron said: “it’s a political crisis that Europe and the European Union is mostly living today.”

The prime ministers of Denmark, Belgium and Luxembourg also backed the idea of outsourcing the effort to tame migration, although they emphasized the need to respect international law.

The International Organization for Migration and the UNHCR are cautious about setting up “hotspots” outside of Europe to filter people fleeing violence at home from those trying to get to the continent to improve their lives economically. No country has so far agreed to host any screening centers, according to the EU’s top migration official.

It’s also unclear how much the effort would cost, but the EU-Turkey deal has so far cost more than 3 billion euros ($3.5 billion).

German Chancellor Angela Merkel, who is battling a domestic political crisis with her coalition partners over migration, played down hopes that a full EU summit starting on Thursday will clinch any comprehensive agreement on how to deal with migration.

FILE – In this photo taken on Thursday, June 21, 2018, migrants wave from aboard ship operated by the German NGO Mission Lifeline. (Hermine Poschmann/Mission Lifeline via AP)

Merkel instead is pushing for bilateral and trilateral deals to cope with short-term migration pressures. EU nations, Merkel said, have to see “how can we help each other without always having to wait for all 28, but by thinking what’s important to whom.”

“It is also about bi- and trilateral agreements for mutual benefit,” she said. France’s Macron also supported the idea of members acting in smaller groups.

Italian Prime Minister Giuseppe Conte said he would propose a plan representing a “paradigm change” in how Europe manages migration. Conte said it would replace the current migration rules — known as the Dublin Regulations — which insist that migrants must apply for asylum in the first European country they land in.

Meanwhile, Spanish Prime Minister Pedro Sanchez urged his EU partners to help Spain deal with a growing number of arrivals across the Mediterranean Sea. The UNHCR says around 40,000 people have arrived in Europe by sea so far this year, some 16,000 in Italy, 12,000 in Greece and 12,000 in Spain.

His appeal came as migration tensions surged on the Mediterranean itself.

A Spanish aid group that has rescued thousands of migrants from the Mediterranean said Italy had declined its offer to help seven smugglers’ boats carrying about 1,000 migrants in need of rescue off Libya’s coast. Proactiva Open Arms says in a tweet Sunday that Italy is seeking to have the Libyan coast guard force the migrants back to North Africa.

FILE – In this photo taken on Thursday, June 21, 2018, a view of the ship operated by the German NGO Mission Lifeline. Italy’s interior minister says Malta should allow a Dutch-flagged rescue ship carrying 224 migrants to make port there because the ship is now in Maltese waters. (Hermine Poschmann/Mission Lifeline via AP)

Aid groups say conditions for migrants on the shores of lawless Libya are atrocious and accuse Italy of being complicit in the abuse of those migrants.

Tensions between Italy and Malta also flared, with both EU nations refusing to let a German rescue ship with 234 migrants aboard dock at their ports.

Malta’s home affairs minister, Michael Farrugia, and Italy’s transport minister, Danilo Toninelli, engaged in a Twitter war of words Sunday over which country was being more “inhuman” about the fate of the Lifeline and its passengers.

Maltese Premier Joseph Muscat sought to lower the rhetoric as he arrived Sunday in Brussels, saying now was not the time for a “blame game.”

Under its new anti-migrant government, Italy has refused to let humanitarian aid boats dock in Italian ports, arguing that they are only encouraging smugglers in North Africa.

As with everything linked to migration in Europe, even the meeting in Brussels has not pleased everybody. Four eastern EU countries — the Czech Republic, Hungary, Poland and Slovakia — refused to attend and reject taking in migrants in general.

That means that whatever is agreed upon Sunday, it would still face a full test when the full two-day EU summit starts Thursday.