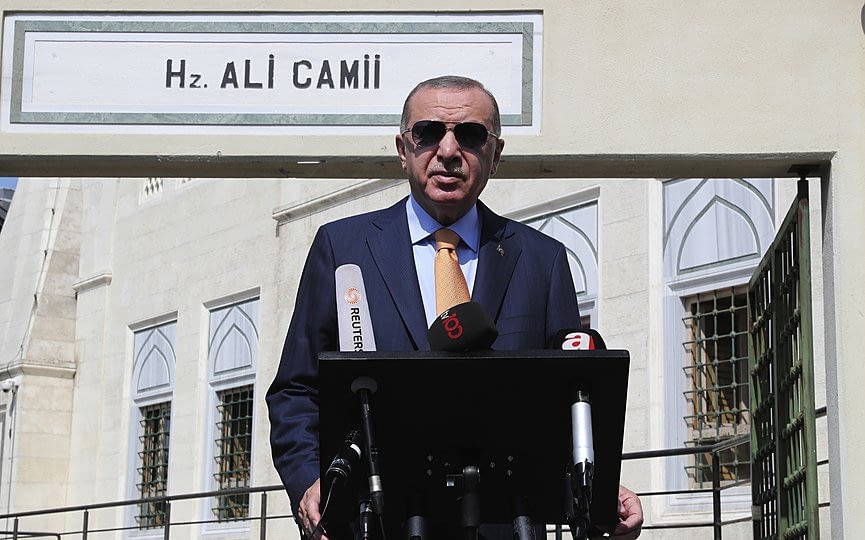 Turkey's plans to hunt for oil and gas, under a maritime deal with Libya dividing the waters between them that is unrecognized by another country, set off a spiral of tension that saw Greece respond by sending warships off the island of Kastellorizo to shadow a Turkish energy vessel and warships.

Both sides have also conducted naval maneuvers to flex their muscles, bringing fears of an accidental battle that could engulf the region, with the United States, European Union and NATO – to which Greece and Turkey belong – intervening.

Turkey disputes Greece's and Cyprus' seas in the East Mediterranean and Aegean and Erdogan had hinted he was willing to go to war over it before ratcheting down in withdrawing ships from Kastellorizo.

President Recep Tayyip Erdogan says Turkey is ready to meet with Greece's leader to resolve the standoff over energy exploration in contested waters in the eastern Mediterranean.

"Could there be a meeting with Greek Prime Minister (Kyriakos) Mitsotakis? What's essential is what we discuss and in what framework," Erdogan told reporters in Constantinople, said Agence France-Presse (AFP.)

"We can meet if there is goodwill. We can talk via videoconference or meet in a third country," Erdogan said after he earlier said he was also willing to talk but only in Greece made concessions.

He canceled scheduled talks in Ankara between officials of both countries after Greece, countering Turkey's deal with Libya, made a similar agreement with Egypt setting seas boundaries for energy exploration.

Media in both countries have taunted the other sea but Greek officials chided the newspaper Dimokratia for putting under a photo of the Turkish leader a cutline that read "F*** off Mr. Erdogan,” Greece saying foreign leaders need respect.

Turkish Foreign Minister Mevlut Cavusoglu said Greek Ambassador Michael-Christos Diamessi had been summoned to the Foreign Ministry in Ankara over the photo as Erdogan previously wanted a German comic extradited for insulting him and is thin-skinned about criticism.

Erdogan signalled the Oruc Reis would return to work, while also saying its withdrawal was deliberate to bring negotiations.

"If we pulled Oruc Reis back to the port for maintenance, it has a meaning," he said. "It means: 'Let's give a chance to diplomacy, let's show a positive approach.'"

Greek Foreign Minister Nikos Dendias in Prague said Greece believed "a dialogue should start and that international law should not be violated. Of course in this area nobody should try to prevail by force".

He added Greece was "always open to a dialogue with Turkey as regards coastal waters in the exclusive economic zone, provided that Turkey stops its provocative acts in the area,” said AFP.

If Turkey doesn't keep its ships out of Greek waters or Erdogan and Mitsoakis don't reach an agreement, the Greek leader wants the European Union to impose hard sanctions in a meeting with the Turkish side Sept. 24-25.