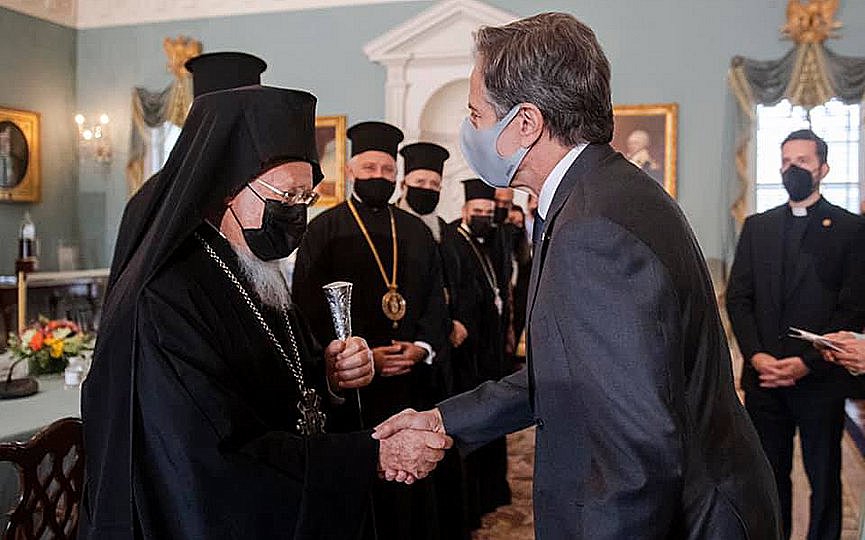 His All-Holiness Patriarch Bartholomew with Secretary of State Antony Blinken at the State Department on October 25, 2021. (Photo: Facebook/Archbishop Elpidophoros)

Greek officials rarely receive the reception that Ecumenical Patriarch Bartholomew experienced this week in Washington. To be specific, he was received and addressed with the warmest words by the country’s leadership, the Secretary of State, the Speaker of the House and Senate, and the American President.

These are certainly not random events and tributes. Nor are they just given away. They are the distillation of the toils of a lifetime; the prestige gained through a series of actions in the good and in the difficult times – choices that are conducive to maintaining long-term cooperation and trust with people capable of strengthening important relationships.

The Patriarch’s mission on his current journey is twofold and mutually supportive: ensuring freedom of operation for the Patriarchate in Constantinople and the opening of the Theological School of Halki – key issues for its future.

As is well known, and as a matter of fact, necessary, the Patriarch is obliged to walk on eggshells if not on burning coals, to take all measures, and to express himself in such a way as not to offend – at least in public – the sensitivities of the Turks. But this does not mean that he remains inactive, that he does not fight for the preservation of the rights of the Ecumenical Patriarchate.

The following excerpts from the exchange between the U.S. Secretary of State and the Patriarch are indicative:

Bartholomew: We are grateful to the American administration, the administration of the United States, for the continuous support for the Ecumenical Throne and its ideas and values which we try to protect, struggling at the same time to survive in our historic seat in Istanbul.

In his meeting with the President, he brought up, among other issues, the climate crisis. But the opening of the theological school of Halki was the top issue, the one of greatest interest to the Patriarch.

Of course, many attempts have been made to open the School since 1971, when it was closed, to no avail, because the Turks set unacceptable terms of reciprocity regarding Greek Muslims in Thrace – behavior by Ankara that is a violation of the principles of international law.

The current conditions, however, favor the resolution of this issue. The Patriarch is Bartholomew, a leading international religious figure. And in the United States, we have one of the most sympathetic and knowledgeable people on the subject in the White House: President Biden.

Greece is ruled by a strong government with a popular Prime Minister. And in Turkey there is a President who is desperately looking for ‘victories’ that will help him to win the next election.

So the conditions are right. Who knows? Solutions have been found for much more difficult problems than this. After all, a solution will be in everyone’s interest.