Georgakas was the Director of the Greek American Studies Project at the Center for Byzantine and Modern Greek Studies at Queens College. He was editor of the Journal of Contemporary Hellenic Issues and his biweekly Viewpoint in TNH was one of the most-read and beloved columns in the newspaper.

His memoir, My Detroit: Growing Up Greek and American in Motor City, is a treasure trove of Greek-American history. Georgakas’ Detroit: I Do Mind Dying, published in 1975, documents African-American radical groups in Detroit during the 1960s and 1970s.

He was the author, editor, or co-author of a dozen titles and was a sought after commentator on film and mass media, appearing on MTV, the History Channel, the Canadian Broadcasting System, Pacifica Radio, the Voice of America, and Greek National Television among other radio and television outlets. Georgakas had taught at New York University, Columbia University, the University of Oklahoma, University of Massachusetts-Amherst, and Queens College. Many of his books have been translated into French, Italian, Spanish, and Greek.

Georgakas was born March 1, 1938 to Xenophon and Sophia Georgakas in Detroit. In his memoir, he brought the people and history to life so that we felt as though we knew his family members and the neighbors whose lives intersected for a time in the old neighborhood. Even if we grew up in Astoria or Chicago and not Detroit, the Greek culture, traditions, and heritage have molded our experience. We share with the same pride the Greek-American success stories and the contributions of those who struggled so their children and grandchildren could have a better life, though there were many who slipped through the cracks as well. Change seems to be the only constant and though Georgakas’ Detroit may no longer exist, the memory of it lives on in his book.

In 1966, Georgakas and painter Ben Morea helped found an anarchist group affiliated with New York City’s Lower East Side. He long served on the editorial board of Cineaste magazine, the acclaimed film quarterly, and specialized in Latin American cinema.

Georgakas was also the subject of a documentary film titled Dan Georgakas: A Diaspora Rebel by filmmaker Kostas Vakkas. The film screened at the 17th Thessaloniki Documentary Festival in 2015. In it, Georgakas tells his life story and his experiences growing up in Detroit.

Georgakas told TNH at the time of the film screening that “my rebellious perspective is linked to growing up in a working class district of Detroit and being born Greek and American. Life had greatly improved for all of us as a result of the leftist reforms begun in the 1930’s. I wanted to accelerate that kind of change. As a child of immigrants, I was not programmed to consider all things American as normal and positive. This made it easier to go against convention. In a similar fashion, as an American, I was not programmed for traditional Greek culture either. Much of my subsequent writing and activism has been directed at melting the mind-forged manacles that prevent us from understanding a new economic order based on mutual aid would be far superior to our present competitive system.”

Georgakas has left the bulk of his papers to the Walter P. Reuther Library, Archives of Labor and Urban Affairs at Wayne State University, with writings on cinema in the Tamiment Library of New York University.

Writer John Merrick posted on Twitter about Georgakas’ passing: “Very sad to hear that Dan Georgakas, co-writer of one of the great works of left history Detroit: I Do Mind Dying, has passed away. RIP.”

Lou Katsos, AHEPA and EMBCA founder and president also posted on social media: “Getting a call from Prof. Nicholas Alexiou, and later others, I was deeply saddened to hear that one of the foremost Hellenic American educators and scholars Prof. Dan Georgakas fell asleep in the Lord a few hours ago.”

Katsos continued: “My sincere condolences to his wife and family. He will be missed by many in the academic community, the hundreds of students who were honored to attend his classes and lectures, and our Hellenic community worldwide. His mother and aunt were among the children that were rescued by the Japanese ship the Tokei Maru (something he discovered decades later) during the Burning of Smyrna in 1922. May his memory be eternal.”

In 2018, the New York Greek Film Festival (NYGFF) honored Georgakas with a tribute held at the French Institute Alliance Française (FIAF) Florence Gould Hall in Manhattan. Journalist Vicki James Yiannias, Prof. Peter Bratsis, and film producer Frosso Tsouka discussed Georgakas’ contribution to the presentation of Greek language films in America. A film screening of A Girl in Black (1956) and a Q&A with Georgakas followed the discussion and he once again impressed the audience with his wisdom, wit, and humility.

Yiannias noted in her introduction, “author, educator, historian, and film scholar, Dan Georgakas is one of the founders of the New York City Greek Film Festival. Since the 1980s, he has played a key role in the promotion and exhibition of Greek film in America. He has written extensively about Greek films in newspapers, magazines, film anthologies, film guides, and academic journals. As an editor of the acclaimed Cineaste film quarterly, he established a relationship between Cineaste and the Thessaloniki International Film Festival.”

NYGFF General Director Maria Tzobanaki thanked Georgakas at that time for his “devotion to the Hellenic ideals and culture, on behalf of the Greeks who love and respect the arts,” and shared “their deepest appreciation for your contribution.”

More recently, Georgakas participated in various Zoom events and conferences relating to Greek-American culture and history. He will be missed. 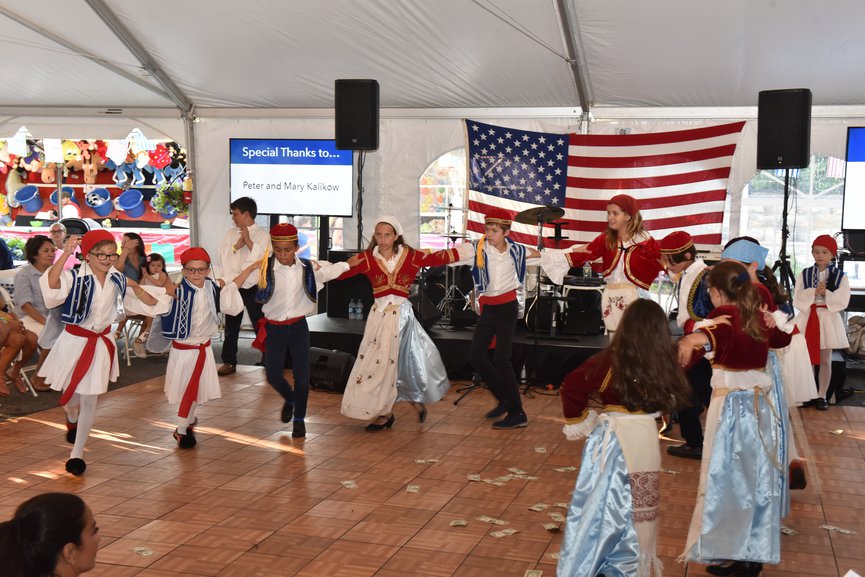 KANSAS CITY, Mo. — More than $1,4 million had been raised as of Saturday for a man who spent 43 years behind bars before a judge overturned his conviction in a triple killing.