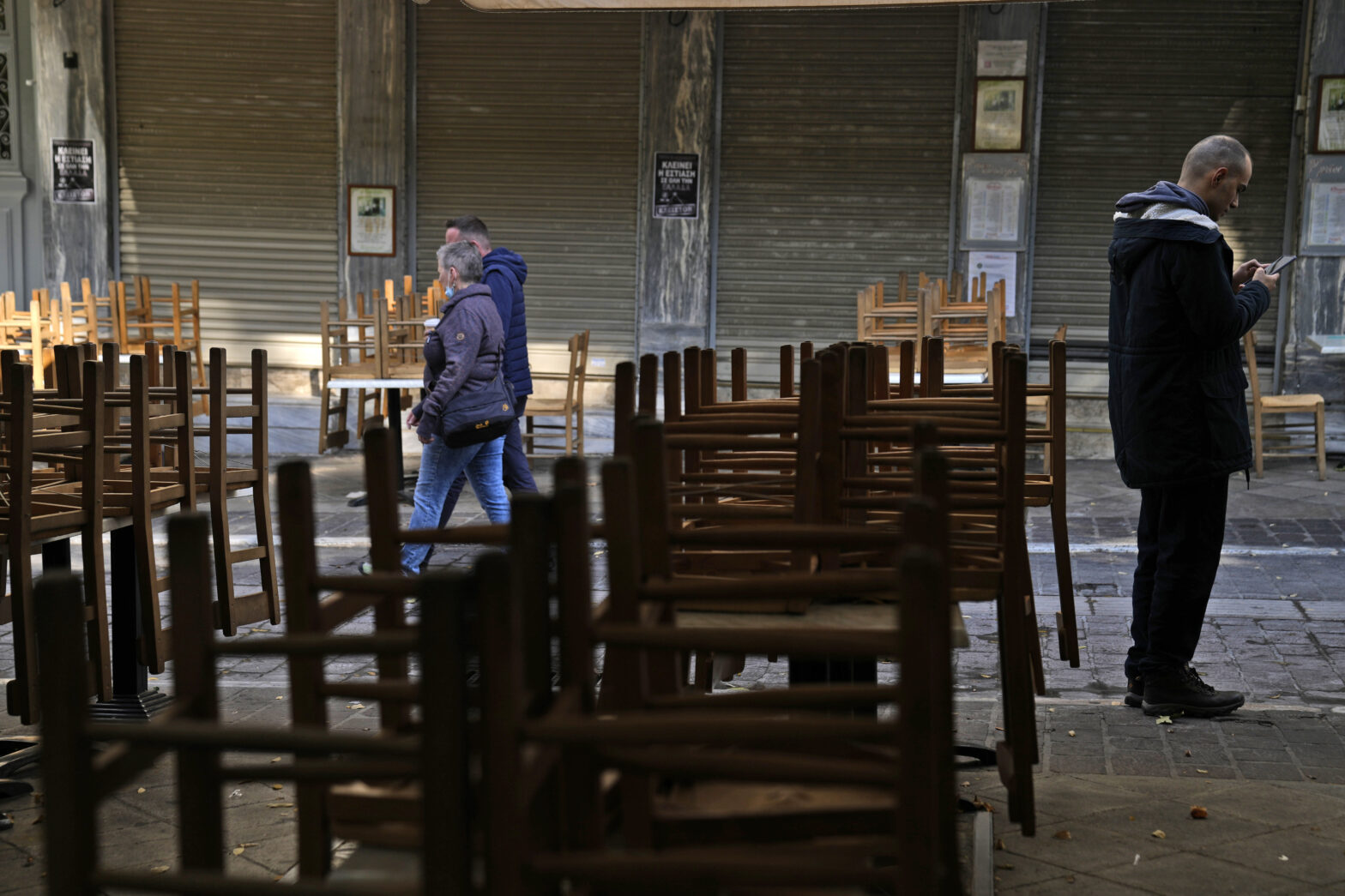 ATHENS – Restaurants, tavernas, bars, souvlaki shops and food service outlets shut down Nov. 16 across Greece in protest of government measures requiring those not vaccinated against COVID-19 to present negative tests before being allowed in.

While the measure is aimed at slowing the pandemic that’s spreading with record numbers, the eatery owners said their interests were in getting more customers through the doors after suffering big losses during earlier lockdowns.

The 24-hour shutdown said widespread participation, reflecting the displeasure after Prime Minister Kyriakos Mitsotakis, who had met with representatives of the sector, would not reverse the restriction as he mulled even more.

Record participation was recorded, said Kathimerini, spreading outside Athens to areas including Iraklio, Larissa, Nafplio and Livadia. In other areas, such as on Crete, some closed their shops for three hours in symbolic protest and support.

Across the capital, eateries placed upside-down chairs on tables to show they were closed, taking another business hit even in popular areas and tourist areas which saw everything from cafes to small shops shuttered for the day.

Even delivery network Wolt informed customers that some of the food service outlets it cooperates with would be closed, the report said, adding that because of the strike there were long lines outside bakeries also offering coffee and drinks.

Food service entrepreneurs said the measures are another blow they can’t take even though lifting them would see anti-vaxxers spreading the Coronavirus allowed inside to mix with the vaccinated who Mitsotakis said would have privileges.

“These are measures that reduce our potential clientele by up to 50 percent, shrinking our turnover dramatically and aggravating the sustainability problem that the food service sector faces, with major consequences on employment,” said the head of the Federation of Restaurant Enterprises (POESE), Giorgos Kavvathas.

He added that companies in the sector were already seeing a drop in turnover between 40-50 percent in the first 10 days of the new restriction, more of which could be added as the pandemic worsens.

The sector’s representatives also held a rally in the main Syntagma Square outside Parliament where Development Minister Adonis Georgiadis met them and discussed their demands.

He said that some 29,000 enterprises in the industry have received state support through the special program for food service, with subsidies that kept them afloat and that the aim is to help them through Christmas and the holiday season.

Protesters in the northern city of Thessaloniki placed an empty coffin outside a government building, while marchers carried black balloons in the southern port of Patras. Brief scuffles broke out at a rally in central Athens when police stopped demonstrators blocking traffic near the prime minister’s official residence.

Greece is currently reporting its highest numbers of confirmed coronavirus cases of the pandemic and the highest COVID-19 mortality rate in six months. The government re-imposed some restrictions that target the roughly one-third of the population that remains unvaccinated.

Greek health authorities reported a daily record for new cases, with 8,129 infections recorded in 24 hours. They also reported 80 more COVID-19 deaths, bringing the total death toll in the country of about 11 million to nearly 17,000.

The government’s public health advisors have recommended tighter capacity limits for businesses and other measures to control infections but Mitsotakis has turned his focus to an economic recovery while urging vaccinations, which hasn’ worked.

“We support the public health measures, but we also need assistance,” he told state-run television. “Let’s not forget that in the last 20 months, catering businesses were closed for at least nine, and others without outdoor customer spaces were closed for 12 months. The money that was lost will never be regained, so clearly we need to have a serious discussion,” he also said.