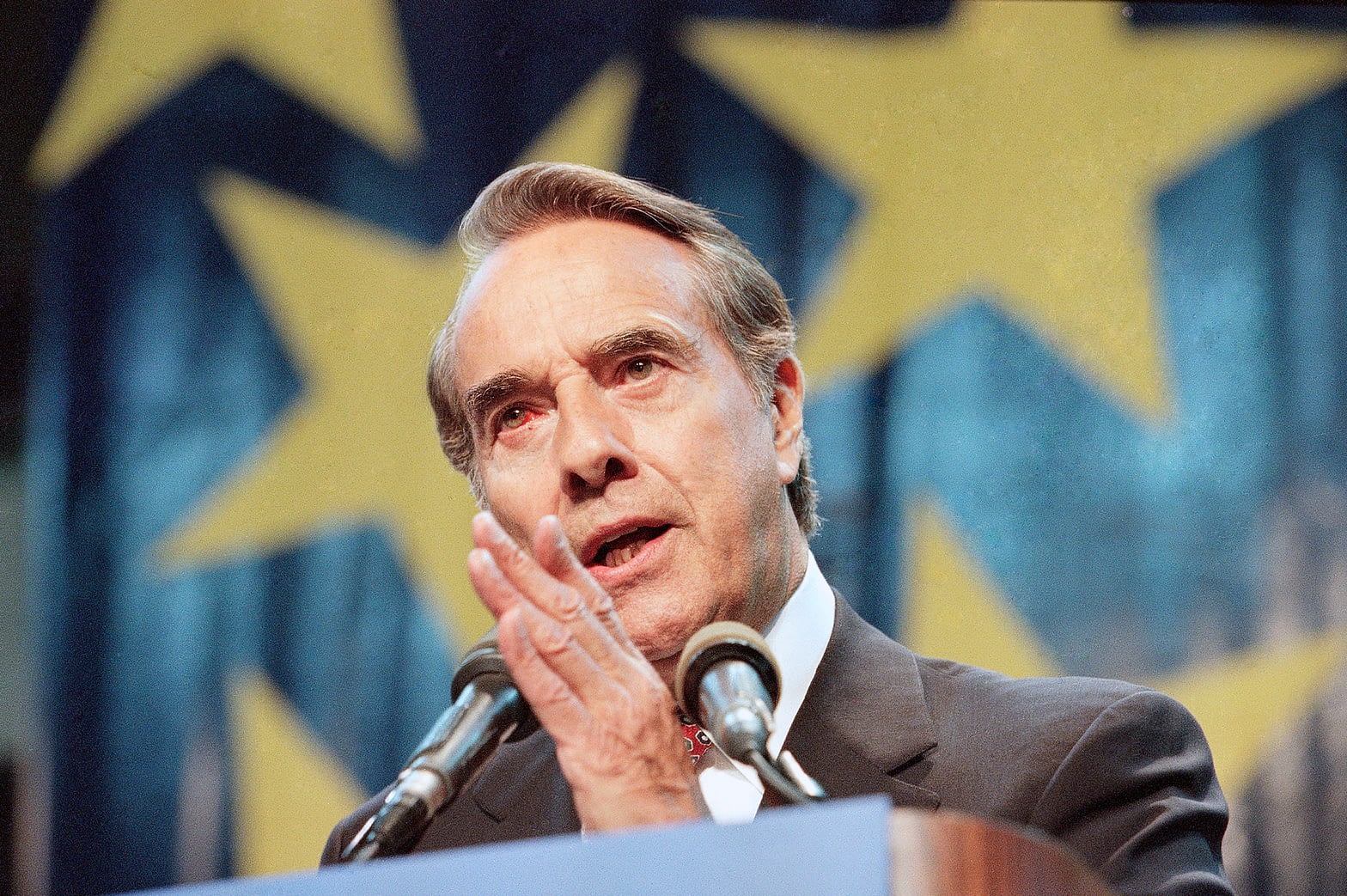 FILE - Sen. Bob Dole, R-Kan., makes a speech to supporters as he announced his bid for the Republican nomination for president in Topeka, Kan., April 10, 1995.(AP Photo/Doug Mills, File)

Ninety-eight years ago, Bob Dole was born in small town Middle America, in a place called Russell, Kansas. At 21, while a combat soldier in Italy during World War II, Dole was severely wounded by German gunfire, and essentially left for dead. He survived, and after a year in and out of critical condition, he recovered, except that he never again had use of his right arm. Determined to make the most of what he had left, Dole steeled himself to a lifetime of achievements few have ever matched: he was elected to the House of Representatives and then the Senate, where he served as the Republican leader for 11 years. He was Chairman of the Republican National Committee, the Republican vice presidential nominee and presidential nominee, and a presidential candidate on two other occasions. He spent the final years of his very long life as an ambassador to causes such as veterans’ affairs, hunger, and bipartisanship. Bob Dole passed away earlier this month.
My father was not politically partisan. Like most Greeks who immigrated to the United States in the middle of the 20th century, he tended to side more with Democrats. But he was a Harry Truman and John Kennedy Democrat; certainly not the 21st century ‘woke’ variety. In 1996, I was happy when he told me he was voting for Dole (I voted for Dole too, because I was a big fan of his running mate, Jack Kemp; otherwise, I would’ve voted for Ross Perot), because, he said, Dole is a “sovaros anthropos.” That directly translates to ‘sober’ as in ‘serious’, not as in not drunk. My dad had little patience for politicians of either party who were shameless and clownish; Dole, in contrast, earned his respect.
I was never a huge Dole fan. Like I said, I became somewhat enthused about his candidacy – though I never thought he had much chance of winning – because of Kemp. But I always respected Bob Dole, as did tens if not hundreds of millions of other Americans. He brought a certain class and grace to Washington that is rare nowadays.

Lee Atwater started the modern cycle of vicious presidential campaigning in 1988, when, as candidate George H.W. Bush’s campaign manager, he used just about every trick in the book to wipe out Democratic nominee Michael Dukakis’ summertime lead, and when Dukakis refused to lower himself to fight back just as dirty, he wound up losing that November in a near-landslide. But the rest of the Democrats didn’t go quietly into the night. They lampooned Bush’s running mate and eventually vice president, Dan Quayle, the same way they later used the ‘idiot’ moniker to describe Bush’s son and namesake, President, George W., and 2008 Republican VP nominee Sarah Palin. The campaigns of 2016 and 2020 took viciousness to a level not seen since the days of Adams vs. Jefferson. But there was a wonderful respite in 1996, when Dole challenged incumbent President Bill Clinton. The debates that year were all but a lovefest, with Clinton and Dole exchanging compliments, and the contentiousness of the running mates’ debate limited to Democrat Al Gore repeatedly and robotically calling the Dole economic plan an “risky tax scheme,” and an exasperated Kemp replying: “get real, Al!”
Clinton, who made all the accommodations the Dole team asked for in the debates due to his immobile arm, deserves half the credit for the gentlemanly contest. And Dole deserves the other half.
Dole didn’t start his career being quite so lovable. In 1974, when Richard Nixon resigned the presidency amid the Watergate scandal, the public initially breathed a sigh of relief and welcomed his vice president Gerald Ford, rather warmly. They deemed Ford more open, trustworthy, and likable, but quickly turned on him when he pardoned Nixon. When Ford in 1976 chose Dole to be his running mate, he didn’t do himself any favors, as the public remembered that Dole was a staunch Nixon defender during the Watergate crisis. Dole’s physical similarities to Nixon (deep voice, dark brooding eyebrows) didn’t help either. The Ford-Dole ticket lost to Jimmy Carter and Walter Mondale, essentially the “we don’t know much about them, but they’re not Nixon” candidates.
However, as Dole continued to mature both in years and in political experience, he became more refined. He remained passionate about the issues, but his delivery was polished, not abrasive. Above all, he had a hilarious deadpan dry wit that sent Democrat and Republican colleagues alike into fits of laughter.

In 2016, none of the Bushes attended the Republican Convention at which Donald Trump would be crowned Party nominee. While both Presidents Bush were always exemplary in their restraint to criticize their successors, they certainly held a petty grudge because of how Trump mocked Jeb Bush into an early primary exit. Bob Dole, though, showed up to support his party’s nominee.

Another remarkable thing about Dole was how he dealt with his disability. He kept a pen lodged in his paralyzed right hand, and kept his left hand extended outward when shaking hands with right-handers, surely an inconvenience to him, not to them. After all, if each person in an audience shook his hand in an unconventional manner, they’d be inconvenienced only once, whereas Dole chose to be inconvenienced a thousand times, per event!

In 1996, I traveled to Red Bank, NJ to hear one of his campaign speeches live. On television, Dole always looked very gray to me. Not his hair, but his whole aura. But in person, he looked colorful, radiant, and charismatic; not what I had expected at all. On that day, I was one of those right-handed people who got to shake his inverted left hand.
Bob Dole exemplified decency and dignity. A ‘sovaros anthropos’ indeed.

Nikos Androulakis, the president of PASOK-KINAL, preferred to celebrate Panagia in Montreal, together with his expatriate friends, instead of in Greece. 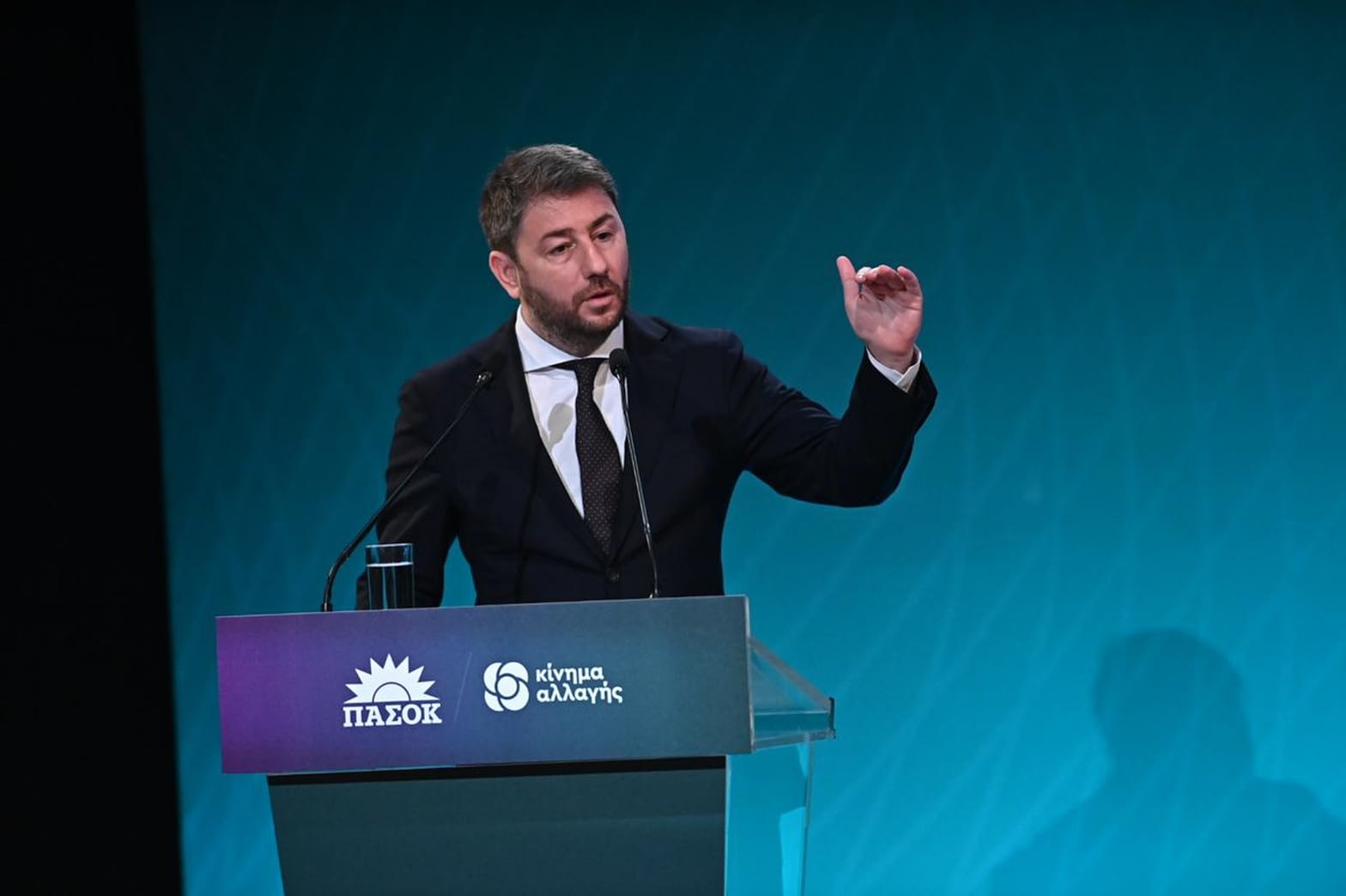